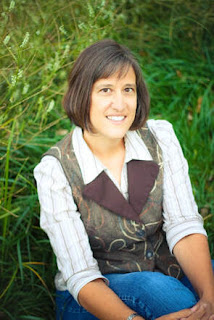 Jeannie Mobley is the author of the new young adult historical novel The Diamond Keeper. Her other books include the YA novel The Jewel Thief. She is a professor of anthropology, and she's based in Colorado.

Q: The Diamond Keeper is your second novel featuring the Hope Diamond--why did you decide to return to the jewel in your new book?

A: When I first was inspired to write about the Hope Diamond, there were three moments in history that intrigued me.

The first was when it came to France and Louis XIV ordered it cut in a nearly impossible way. The second was when it was stolen during the French Revolution and disappears for some time. The third is when it comes to America and acquires the reputation for being cursed.

So, in writing my books, I decided to start with the oldest story and work my way forward.

The Jewel Thief (which came out in May 2020) is about the cutting of the diamond in 1623. My new book, The Diamond Keeper, which comes out Nov. 16, 2021, is about the theft of the diamond during the French Revolution in 1792, so more than 150 years later than the first novel. It was interesting to write a sequel in which the only character that continues is an inanimate object.

Q: The Publishers Weekly review of the book says, "Claudie is a worthy heroine whose clearly wrought insecurities pair well with her fierce loyalty, appealing wit, and admirable self-reliance." How did you create Claudie, and her sister Mathilde?

A: Thanks for noticing that great line in a great review!

Claudie is my favorite kind of heroine, both to read and write, because she is an ordinary person who, all her life, has been made to believe she is nothing special. But when she is faced with extraordinary hardships, she discovers the extraordinary in herself that has been there all along.

I think many of us are that kind of person, harboring great strength we are just waiting to discover.

In Claudie’s case, she is a plain, practical, hardworking girl set against a pampered, beautiful sister, Mathilde, who also rises to the challenges before her. It gave me a chance to explore the brains vs. beauty contrast that appears in many books about women’s beauty in a more nuanced way than is sometimes done. 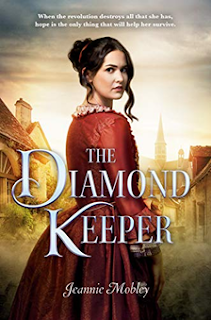 As with all my main characters, I supposed there is a bit of me in Claudie, and definitely in the complicated relationship between the sisters.

Q: What do you see as the right mix of history and fiction as you write your books?

A: When I write historical fiction, I like to find a time or place that fits the story I want to tell, so that I don’t have to tamper with history too much.

We really don’t know what happened to the French Blue after it was stolen from the palace in Paris, but I knew I wanted my thieves and smugglers to be people of principle and not just greedy scoundrels trying to get rich.

I also knew I wanted to write a story about the revolution that didn’t take place in Paris, as I think most French Revolution stories take place in the city.

So, I started researching the revolution in a bit more depth, and when I learned about the counterrevolutions of Western France, I knew I had what I was looking for—a bit of the French Revolution that would be new to many readers, and a good reason for the thieves to be smuggling the diamond out of France beyond personal gain.

My story is entirely a fiction, but one that fits cleanly with the history and with some of the theories about what happened to the diamond.

Once I have a good fit, I mostly pick details that I can include without modifying them, and only fudge the history when I can’t get around it. In this book, I only have one big fudge—I turned the Abbey of Bon Repos into a nunnery when it really was a monastery that housed only men.

A: Mostly, I hope it is a page-turner, a fun adventure, an opportunity to escape the modern world into the daring and danger of the French Revolution.

But it is always nice when readers learn something about history, discover a passion for exploring the past, or appreciate something about themselves a bit more because they saw it in a character and admired her.

A: Writing a book during the pandemic was tough, and at the same time, my day job got a lot tougher, and my mother-in-law came to stay with us for an extended time. And let’s face it, life hasn’t gotten much easier in this second pandemic year.

So at the moment, I am being gentle with myself, and finding joy in the world where I can, which involves a lot of bike riding, weaving, and knitting.

As I write this, I am waiting in the airport to go to England to meet my brand-new grandson who was born two weeks ago. So, writing has taken a back seat for a bit, while I refill my creative well.

But I have a couple of unfinished projects on various back burners, and I am planning to get back to one of them after the holidays. Most likely, it will be the story called Recollecting Ruby, about a girl graduating from high school at the start of the Great Depression, trying to come to terms with her complexly fractured family.

Then again, there is that third diamond story waiting out there, so…

A: I’d just like to remind readers that The Jewel Thief is the companion book to The Diamond Keeper. They can be read in either order, as they are independent stories.

And as always, it helps authors a great deal if readers leave reviews on sites like Goodreads, Amazon, or other sites where reviews are written.

And as always, Happy Reading!