Kris Clink is the author of the new novel Sissie Klein Is Completely Normal, the second in her Enchanted Rock series, which began with Goodbye, Lark Lovejoy. She hosts the Kris Clink's Writing Table podcast, and she lives in Kansas.

Q: This is the second in your Enchanted Rock series--did you know before you started the first book that you'd be writing a second, and how do the two fit together?

A: I really enjoyed the characters in the first book, so I’d hoped to write a second. Originally, I planned to write about Lark’s friend, Bianca, but when I sat down to write, I decided to consider other characters.

In Goodbye, Lark Lovejoy, Sissie is married to a real jerk. At one time or another, haven’t we all wondered, “Why is she/he with that guy/girl?” It made sense to find out why Sissie stayed with Caleb, so I dug into her story.

Q: How did you create your character Sissie?

A: She had appeared in only two scenes in the previous novel, Goodbye, Lark Lovejoy. We knew her home life wasn’t so great. I wanted to better understand how she arrived in that space. 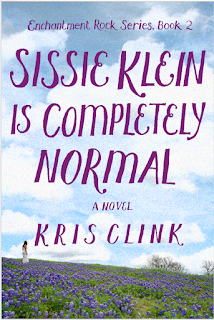 A: Sissie Klein’s mother, Kathleen, has a knack for knowing when her image has been bested by the facts, like when she learns her teenage daughter is pregnant. She makes a habit of embracing negative circumstances saying, “_(Blank)___  is completely normal.” A variation of the line is repeated throughout the novel.

Q: The Kirkus Review of the book says, "...the narrative’s insightful examination of the relationship between maturity and self-sacrifice is expertly wrought, and Sissie is so likable that readers can’t help but root for her all the way to the end." What do you think of that assessment?

A: I was humbled and grateful the reviewer appreciated what I was doing. I want readers to understand Sissie. They may not agree with the path Sissie’s life takes, but by stepping into her shoes, they can appreciate and possibly respect the “why” behind her decisions.

A: I’m letting the mostly drafted third novel in the Enchanted Rock series rest while I write Clara, Deconstructed, about a woman whose quick trip to settle her father’s estate goes sideways. It falls in line with the others I’ve written about female friendships and personal challenges.

A: When I’m not writing, I host Kris Clink’s Writing Table, a podcast about books and writing.