Alec MacGillis is the author of the new book Fulfillment: Winning and Losing in One-Click America. He also has written the book The Cynic. He is a senior reporter for ProPublica, and has worked for The Washington Post, The Baltimore Sun, and The New Republic. He lives in Baltimore.

Q: What inspired you to write Fulfillment?

A: For years, I had been wanting to write something big about the growing regional disparities in the U.S.

I had been seeing the gaps growing everywhere--between my hometown of Pittsfield, Mass., and metro Boston; between the Midwestern cities I went to as a reporter and cities on the coasts; between Washington, D.C., and Baltimore, where I have split my time working and living over the past 20 years.

After Trump got elected in 2016, which had a lot to do with those regional disparities, I decided it was time to write the book. And over the course of the next year, I settled on Amazon as the frame for it.

Q: In a review of the book on NPR, Alina Selyukh said, "Ostensibly about Amazon, the book is instead an economic history of the country, shaped by an intimate introduction to people living and working in Amazon's shadow as their home cities and states transform around them." What do you think of that assessment?

A: It's a good one. My goal with the book was to give the reader a visceral, granular sense of what regional inequality looks like in our country, through a specific set of places and people living within them. 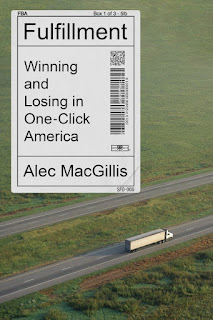 I chose Amazon as the frame for two reasons: one, it's so ubiquitous that it serves as a handy thread to take you around the country, to show you what we're becoming as a society and two, it and the other tech giants are a major driver of the regional inequality, by drawing so much commerce and prosperity that used to be dispersed around the country into the tech capitals where they are based.

But the book all along was intended to be not about Amazon itself, but about the country that lies in its lengthening shadow.

Q: You begin the book describing an Amazon worker relegated to his basement during the Covid pandemic. Why did you decide to start there, and how has Covid affected the company and its workers?

A: I had actually reported much of the book by the spring of 2020, when the pandemic hit.

Initially, I was of course very unsure about what the pandemic would mean for the book--if you're writing a big book on the national condition, it is unsettling to have a major event come along that shocks that condition.

But it fairly quickly became apparent that the pandemic was only going to accelerate the trends described in the book--social atomization, Amazon's growth, etc.

And I decided that the best way to incorporate the pandemic into the book was with new bookends, in the prologue and epilogue, that captured that acceleration, that showed readers what life was like in the warehouses as the orders ramped up from all of us hunkered down safely in our homes.

One of the book's goals all along was to reveal the consequences behind the easy one-click order, and that became all the more imperative with Covid-19.

A: I see three main avenues for addressing the concerns raised in the book.

One is worker activism in the warehouses, which is going to continue even after the union defeat in Bessemer, Alabama.

Another is the legislative and regulatory effort to rein in the company and the other tech giants, which is ramping up in Washington and shows some real promise, though it will of course be a real battle.

And finally, there is our response as citizens and consumers. I have not been advocating a boycott or anything like that, but I do believe that a lot rests on how all of us now emerge from the pandemic, whether we are willing to re-engage with the physical world around us, not only as shopper but in all the other ways in which we sustain our communities and make them worth living in--going to bars and restaurants, going to the movies and theater and symphony, getting ourselves out of the comfort of our one-click cocoons.

A: I am on a fall-semester reporting fellowship in Berlin, looking into the German effort to move beyond coal. That may become the basis for a future book.

A: I also wrote a book about Mitch McConnell. It's called The Cynic.