Stan Haynes is the author of the new historical novel And Tyler No More. His other books include The First American Political Conventions. Also an attorney, he lives in Ellicott City, Maryland.

Q: What inspired you to write And Tyler No More?

A: I have written two prior nonfiction books concerning presidential nominating conventions in the 19th century.

In doing research for those, I came across the historical event that is the focus of And Tyler No More, which is an accidental explosion on a Navy ship in 1844 that almost killed President John Tyler.

I had always wanted to try my hand at writing historical fiction and decided to use that event and weave a presidential assassination plot into it.

Making it a work of fiction gave me leeway to create my own characters and explore what could have motivated sane and rational people to plot to kill a president, whether it could be justified, how would they go about doing it, and what would be the consequences of their success, or their failure.

Q: In an article for historynewsnetwork.org, you compared the January 6 attack on the Capitol to a march on the White House in 1841. What led to that earlier march, and were there any consequences?

A: The 1841 march on the White House, which became a mob attack similar to the January 6 one on the Capitol, was in response to President John Tyler’s veto of a bill reestablishing a national bank, which was the key economic policy of the Whig Party. It is the setting of a chapter in my book.

An angry crowd broke through the gates of the White House and an effigy of Tyler was hung from a tree and burned only feet away from the mansion.

The Whigs controlled both houses of Congress and Tyler had been elected as vice president on the party’s ticket the previous year. He assumed the presidency when William Henry Harrison died after only one month in office. His veto was viewed as a betrayal of the party that had elected him.

As a result of the veto, almost all of the president’s cabinet resigned in protest, and the Whigs formally tossed Tyler out of the party. It led to constant political battles, and stalemate in Washington, for the remaining three years of Tyler’s term of office. 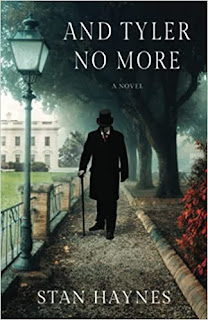 A: I have always read a lot of books about American history. For this project, I focused on ones that dealt with the early 1840s, including biographies of the prominent political leaders of that era.

In addition to President Tyler, some of the other historical figures in my book are Senator Henry Clay and Dolley Madison.

The book also explores the status of slavery at that time, and the annexation of Texas into the United States, which was pending. Books and articles in history journals on those issues were very helpful.

If there is one surprising thing that I learned from my research for this book, as well as that done for my prior books on 19th century politics, it is that there have been several prior periods in American history when our politics have been very divisive.

Those who say that we are currently in an era where “it is the worst that it has ever been” are, in my opinion, mistaken. For one thing, we fought a Civil War.

Taking the historical facts of my book and placing them in a modern context, what if President Joe Biden had died shortly after taking office, if Vice President Kamala Harris took over as president and then vetoed all of the economic and social policy bills of the Democrats in Congress, if the cabinet resigned in protest, and if a President Harris essentially became a Republican?

A: That is something that I wrestled with while writing the book. Fiction gives a writer the ability to make up things but, with historical fiction, those things have to be grounded in reality. You can’t stray too far from the facts.

I remember seeing somewhere that a historical fiction author writing about the Civil War can be creative with some facts, “but Lincoln still has to be tall.”

The trick is to present the real history through the eyes of the fictional characters in a way that is entertaining for the reader. Hopefully, those who read And Tyler No More will come away with the feeling that I was able to accomplish that goal.

A: My plan is to have a trilogy of fiction books focusing on Monty Tolliver, the main character in the current book, with the second book dealing with the battles over the expansion of slavery into the territories in the 1850s, and the third taking place during the Civil War.

I also plan to write a third nonfiction book about presidential nominating conventions, taking the conventions up to the mid-20th century, and focusing on the careers of Theodore Roosevelt and Franklin Roosevelt, who were the two dominant political figures of that era.

A: I think the book will be of interest to anyone who loves reading about American history, on their own or as participants in history book clubs. I would be more than happy to address any inquiries.

For more information about the book, and for my contact information, please go to my website at www.stanhaynes.com.

Thank you, Deborah, for the work that you do with your Q&As blog, and for giving me the opportunity to share information about my book with your readers.