Jean Hanff Korelitz is the author of the new novel The Plot. Her other books include You Should Have Known and Admission. She also is the founder of Book the Writer, which holds pop-up book groups featuring the books' authors. She lives in New York City.

Q: You appeared earlier this year on The Tonight Show, and you discussed with Jimmy Fallon how difficult it was to describe The Plot. Is that more the case with this novel than your previous ones?

A: I guess so. Everything on the jacket copy has been deemed OK for somebody to know. Beyond that you don’t want to ruin the experience.

Q: Speaking of plot, how did you create the plot for this book? Did you know how it would end, or did you make many changes along the way?

A: It just came. There were two chunks of the idea that came at the same time. One was a washed-up writer and a jewel [of a book idea] landed in his lap. Two was what the jewel was. It was a chicken-and-egg situation. Everything else worked out along the way.

Q: The book features a novel within a novel. What was it like to write that? Did you want to create a voice that’s very different from your own?

A: I tried to get out of writing the novel within a novel. I had finished my novel, and now I had to write another one! It involved a lot of heavy lifting. But my editor disagreed, and I took a deep breath and dove back in. 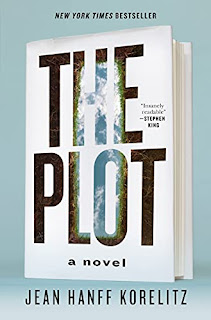 Differentiating between my voice and [my character] Jake’s voice was like an extra burden. I wanted people to understand that he was a good writer, but had failed in the same way I had.

Q: Was Jake based on anyone in particular?

A: He’s not based on anyone I’ve ever known, but he is all of us, the writer’s Everyman. He’s petty, he’s jealous, he’s full of self-loathing. He’s so human. He’s nobody you want to take to the bosom of your soul. The level of recognition by writers who read the book—they say, I am that guy.

Q: In the book’s acknowledgments, you say, “The Plot may seem a little hard on writers, but that shouldn’t surprise anyone: we’re hard on ourselves. In fact, you couldn’t hope to meet a more self-flagellating bunch of creatives anywhere.” Can you say more about how other writers have reacted to the book?

A: I hate to jump on a cultural shortcut, but they feel seen. This is not the first novel to evoke that response—there’s About the Author by John Colapinto, The Body of Jonah Boyd by David Leavitt, A Ladder to the Sky by John Boyne. Other novelists have taken aim at the dark underbelly of literary envy. It’s universal because we’re human.

Q: How difficult was it to write this book?

A: Absurdly easy. I’ve never written a book this quickly.

If you consider everything happening in the world, it was devastating, horrific—I hope it never happens again to me and to everybody.

I was afraid. I started being afraid in the fall of 2019. I was reading about what was happening in China and I was scared. By the winter of 2020 I was a basket case.

In retrospect, that was a part of what got me going so quickly. I hope never to have to experience that kind of fear. In my case, there also was rage over the lack of leadership. It put me in a position where I could write the most successful novel of my career.

A: A novel I had been writing in the fall of 2019. My editor kept turning it down. I wrote it the right way and fixed the problems, and last week it was accepted and it’s coming out in May.

It’s extremely different from The Plot. It’s more of a literary novel about a New York Jewish family. There are lots of plot twists but I wouldn’t call it a novel of suspense.

Now I’m going to take a break. I hope to be involved in the writing of the adaptation of The Plot. And I have elderly parents—I hope to hang out with them more. I’ll sit back and take a break.

A: Yes, about Book the Writer. I just finished a book for an event, Who Is Maud Dixon?. It’s a Patricia Highsmith-esque thriller, a book people kept reviewing with The Plot.