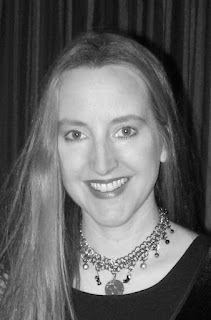 Alice Henderson is the author of the new novel A Blizzard of Polar Bears. It's the second in her series featuring wildlife biologist Alex Carter, following A Solitude of Wolverines. Henderson is a sanctuary monitor, geographic information systems specialist, and bioacoustician.

Q: Why did you decide to focus on polar bears in your second Alex Carter novel?

A: I wanted to address a species that was facing a dire plight, like wolverines with the first Alex Carter novel.

The setting where polar bears live -- remote, isolated stretches of sea ice -- lends itself to suspense, a place where all of Alex’s survival skills would need to be called upon. Due to climate change, the environment of the polar bear is changing at a rapid rate for the worse, and the polar bears Alex is studying need more protection.

Q: Do you think Alex has changed at all from one book to the next?

A: I think Alex is more fired up than ever to dive in and work for the protection of endangered species. She sees the obstacles in the way and is becoming more fearless. She's also really facing the fact that the life she's chosen, working out in the wilds, can be lonely at times.

Q: The novel is set in Churchill, Manitoba, in the Canadian Arctic. Why did you choose this setting?

A: There are 19 subpopulations of the polar bear on the planet. They range across the circumpolar region, from places like Alaska and Canada to Greenland, Scandinavia, and Russia. While things don't look good for any of the subpopulations given climate change, some subpopulations are in steeper decline than others.

I wanted to focus on the Western Hudson Bay population, and that necessitated setting the book in Churchill, MB. I've spent a lot of time in the Canadian Arctic, and it's truly a magical place and a dynamic setting.

I’ll never forget the months I’ve spent there, watching the green of the summer tundra shift to the reds, golds, and oranges of fall, and then to the dazzling snow-dusted white of winter. 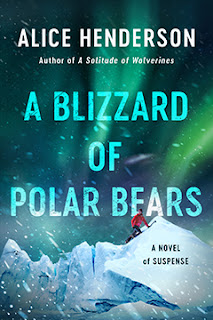 Q: What do you see looking ahead for the world's polar bear population given climate change?

A: Polar bears already suffer from a number of threats, including environmental pollutants like heavy metals such as mercury and polychlorinated biphenyls (PCBs), which are industrial products.

PCBs work their way through the food chain and collect in the bodies of animals. In polar bears, these contaminants are then passed on to their cubs through their milk.

But now with anthropogenic climate change, things are far more dire. Polar bears require solid sea ice from which to hunt seals, their main source of fat. They need this fat to bulk up in order to survive the long summer months of fasting.

However, due to global warming, the ice forms later each year, and breaks up earlier, dangerously extending the time bears must starve. In addition to this, the ice that does form is often rotten and unstable, making it even harder to hunt during the months they actually can.

Recent studies, like this one described in The New York Times (https://www.nytimes.com/2020/07/20/climate/polar-bear-extinction.html), predict that nearly all polar bears will be gone by the end of the century if we continue with business as usual.

We need to take action, and we need to take it now. We keep hearing the call to action, but legislation is sorely lacking. Write to your representatives. Demand a transition to clean energy, if not for the bears, then for ourselves. This kind of climate change legislation would benefit so many other species, from wolverines, to the American pika, to us.

Q: What are you working on now? What's next for Alex?

A: I'm thrilled to say that I'm nearing completion of the third Alex Carter novel, which focuses on mountain caribou.

Different from barren ground caribou which roam in vast herds across the tundra of Alaska and Canada, mountain caribou are a thing of their own. They prefer steep, mountainous habitat, and rely on deep snowpack to be able to reach lichen that grows high in the branches of old growth trees.

But clearcutting has decimated our old growth, and global warming has lessened the height of the snowpack. The lichen that mountain caribou rely on takes decades to grow in hundred-year-old trees, so this loss of our old growth is not easily reparable.

In addition, extensive logging roads and tracks made by snowmobilers make it easier for wolves to hunt caribou, which is not their normal prey. Southern Selkirk mountain caribou, the last caribou herd in the lower 48, was driven to extinction in 2019.

At the end, Canada rescued our last two caribou and brought them up to British Columbia, though mountain caribou populations are not faring well there, either.

For decades, conservationists fought to have the southern Selkirk mountain caribou listed as a distinct population segment (DPS) under the Endangered Species Act. It was only after the last caribou was gone that US Fish & Wildlife Service finally granted the DPS endangered status.

In the next book, Alex is hired by a land trust in Washington state to confirm a possible mountain caribou sighting there. But when she arrives on scene, she quickly learns that her only challenge isn’t finding an elusive caribou on a massive piece of land.

The nearby townspeople are restless; loggers and activists clash over a swath of old growth forest marked for clearcutting. The murdered body of a forest ranger is found strung up in the town’s park, and Alex learns of a backcountry hiker who went missing in the same area the year before.

As she ventures into the forest in search of the endangered animal, she quickly finds herself in a fight for her life, caught between factions warring for the future of the forest and a murderer stalking the dense groves of ancient trees.

A: I’m thrilled to announce that the first book in the Alex Carter series, A Solitude of Wolverines, was recently chosen as the October Mystery/Thriller Pick of the Month at Barnes & Noble, and was also an Editors’ Pick on Amazon.

I’ve been hearing such great things from readers, many of whom were just as enchanted with wolverines as I am. I hope that readers will also find A Blizzard of Polar Bears to be a suspenseful read.

If readers are interested in helping wolverines or polar bears, there are a variety of nonprofit organizations such as the Center for Biological Diversity and the Natural Resources Defense Council that support climate change legislation.

And in the back of both A Solitude of Wolverines and A Blizzard of Polar Bears, there are sections that list further information on these amazing creatures, as well as ways readers can help them.