Sophia Terazawa is the author of the new poetry collection Winter Phoenix: Testimonies in Verse. A poet and performer of Vietnamese-Japanese descent, her other books include the chapbook Correspondent Medley. Her work has appeared in a variety of publications, including The Offing and New Delta Review.

Q: What inspired you to write Winter Phoenix, and how did you decide on the book's structure?

A: Heartbreak. It was heartbreak. I think at the moment of conception, this book came out of me like an almost endless scroll, like the thin silvery threads snaking out of Björk in her music video for “Unravel.”

I had also been watching this repeatedly in September of 2017 when I was grieving the loss of a relationship, compounded by losses of myself in several ways. A trauma wound opened. I was terrified of sleeping alone again. It affected my dreams.

I don’t remember these dreams now, but I do remember that late-autumn in the Tucson desert, where I woke up one night to a ghost who would later identify herself as ancestral. This ancestor ghost knocked on one of my bedroom windows. When I opened my eyes, she stopped knocking and held out a hand.

The vision of her whole self terrified me. She had matted hair that draped over half of her face, and she looked like she had just crawled out of a swamp or a muddy stream. In her hand, I saw loose black teeth.

The structure of Winter Phoenix, I suppose, is kind of like that—loose black teeth. The poems came out, for the most part, one by one. It wasn’t until later that I realized these channeled poems stood alone as testimonies. It made sense at that moment. This must be in a courtroom, I realized.

A: About 82 percent of the way into the book’s completion, I had my heart broken again and sunk into a valley of darkness. I was hospitalized and put on some heavy medication.

So when I wasn’t zonked on Risperdal, I remember staring out over the ends of my toes toward the foam barrier in front of my bed which acted as a courtesy door to the bathroom I shared with another roommate. The foam barrier had a garish print of black mountains with a fire red and yellow background.

With this, the vision of a baby bird arrived. The little one was twitching all alone in its nest. The bird was completely bald and had large unseeing eyes. It was the phoenix! And so I knew, this is why we—the intergenerational “we”—had survived. The Vietnamese term for the mythic phoenix is “Phượng Hoàng.” 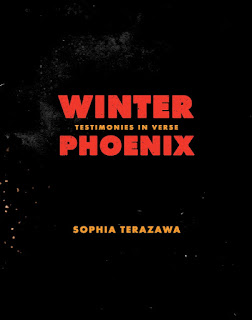 When I left the hospital, Phượng Hoàng floated above a shallow space in my heart, and this was also known as peace.

The title’s “Winter” refers to the 1971 Winter Soldier Investigation, where American soldiers and army personnel confessed to war crimes committed in Vietnam.

The term “Winter Soldier,” from what I learned, referred to a deserter, a traitor, and the act of confession became a site for both treason and spectacle in the U.S. military machine. However, I didn’t want (and still don’t want) this book to be about those soldiers on trial.

What came out was something else, what the poet Paul Celan may have referred to as “Tiefimschnee” (“Deepinsnow”), and in my role, too, I had to climb a hill and translate what appeared when all that snow melted away.

Winter Phoenix became about this firebird and its multitudes of voices coming through—of ancestors and women with my hundred faces and my mother’s thousand faces. We’d bring peace, as well. But first, someone had to scorch the earth.

Q: The writer Susan Briante says of the book, "Terazawa splinters, she reconstitutes, we witness the burn, the rise. There's a limit to what can happen in a colonial language. In Winter Phoenix, Terazawa takes us beyond that." What do you think of that description?

A: Susan is an ANGEL! I love her and cannot fully express the gratitude inside my heart for all that she has made present with her words both on and off the page. Her work, teachings, and meditations with documentary poetics helped to inspire much of our dialogue around the limitations of language.

As my thesis advisor, she witnessed this book become a separate series of witnesses all over again as the manuscript took shape over three years at the University of Arizona.

A: Oh, I know this is a question that I might have to answer again in the future, so thank you for the space to put something together here early on.

There was a great amount of research that went into this, and at the same time, I’m hesitant to point to the mountains of source texts because it’s a matter of who and what I’m de-centering to make room for the undocumented testimonies.

At its source, we have trauma, both personal and collective. We also have a tribunal and, after that, more tribunals. The perpetrators of violence in Vietnam gave testimonies, and yes, I checked out books and printed transcripts and made paper scans and PDF scans and poured over every page with notebooks filled with archival materials.

Before writing much of the poems, however, I made sure to destroy almost every piece of research I had. Nothing else remains of it today.

What stuck in my mind were fragments of soldier testimonies, words strung together which pushed the engine of my manuscript forward. I was in a trance of heartbreak and had to make sure everything flowed as quickly as possible before the voices disappeared and the valley closed in on me.

Was I surprised by these events? No. I was there to work and transmit and document. I was a tape recorder, and the ghosts came one by one. It was a long line through the portal. They each said, “This happened.” Or contradicting the one before her, “No, this happened.”

My head was down to the page as each ancestral witness came forward to narrate a testimony. Maybe I learned of my strength to endure this on a psychic level, and of theirs. I spent much of my teaching stipend on flowers. Bouquets of flowers set out for each ghost. Flowers at my altar. Flowers at the windows. At the back door. Please accept them, I remember saying.

A: My second collection, Anon, is also on the way with Deep Vellum. It’s a finished book of love poems, so I’d say that the labor at this moment is letting my editor tell me it’s okay to let go now.

My third collection is messy but also coming together. I’m editing a completed novel, too, which feels like a dumpster fire.

In a year or so, I sense another portal opening, so I need to prepare for this mentally and physically. I'm also looking for an eligible and relatively healthy sperm donor.