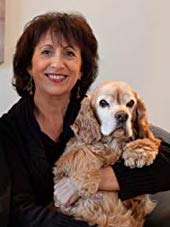 Mindy Pollack-Fusi is the author of the new novel The Narcissist's Daughter. Her work has appeared in a variety of publications, including The Boston Globe, and she lives in Massachusetts.

Q: How did you come up with the idea for The Narcissist's Daughter, and for your character Jody?

A: I have always written personally and professionally, starting with short stories in junior high creative writing classes, poetry during teenage angst years, personal essays whenever pain or joy burst forth (my fav genre), nonprofit PR, newspaper articles (Boston Globe mostly), and two buried memoir manuscripts. This is my first attempt at a novel--which brings us back to your question, which I answer below!

A: One summer Sunday 18 years ago, I climbed into the car with my husband and our two preteen daughters to head home from an annual family reunion that rattled me every year. I couldn’t put my finger on exactly why.

Suddenly, some faraway fiction Muse took over my thoughts. I grabbed a notebook and frantically scribbled what felt like the start of a novel based on 25 years of these reunions. The following week I began the first of multiple writing classes/workshops where we fleshed out characters, plot and story ARC.

I set the story in the “Clinton/Monica Lewinsky” time frame to put the wealthy, important uncle in charge of the president’s media crisis control. This allowed me to create fun stuff like a helipad on the roof of his high-end contemporary home, where he is dropped off for the reunion by the Marine One helicopter! 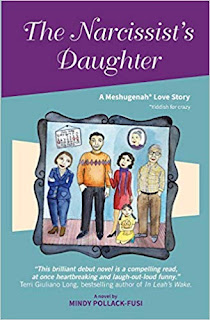 A: Yes and no! The original working title was Glass Reunion which, to me, signified unspoken transparency about this powerful family. The reunion scene I wrote that long-ago day in the car served as a mini-prologue, and then picked up again at the end, in keeping with the title. Reunion flashbacks dotted Part One of the novel, and still do.

But six years ago the third-person point of view felt too flat; switching to first-person POV created more intimacy. My Muse tossed me a fresh, intimate prologue that suited the newer fiction-heavy focus of a mother-daughter conflict and Jody’s new love relationship. Pieces of that initial ending still worked—folded into an original final chapter set at the 1998 family reunion.

A: I’d like to think my novel offers tons of takeaways, most specifically a poignant path from self-doubt to self-discovery, openness and acceptance of self and others.

But I’m biased, so here’s what reviewers have taken away: The Narcissist’s  Daughter explores female courage, resilience, and inner strength as well as funny, painful and touching moments that all families endure, whether they admit it or not. At its heart, it is a love story...between two adults, a mother and a young child and a struggling love relationship between an adult daughter and her mother (the narcissist). Although most main characters are Jewish, the interfaith love relationship broadens the story such that people from various backgrounds will grow along with Jody.

A: Because I chose to self-publish (Jody had waited long enough to tell her story; I avoided delays involved with seeking an agent/publisher), I am now working on The Narcissist’s Daughter’s far-reaching publicity program. A new learning curve.

So I find myself writing in my head for now…and oddly it is all mystery/horror genre. Not sure why that Muse is choosing me, so I don’t write it down—yet. I do want to compile a book of 50 of my best published essays through the past—gulp—35 years. That might be next, unless someone encourages me to drag out one of those early memoirs I drafted in a similar voice to this novel but with an entirely different plot.

A: Hmm, readers might wonder how my working title, Glass Reunion, morphed into The Narcissist’s Daughter.

I had coffee several years back with a neighbor who specializes in counseling adult daughters of narcissistic parents, Stephanie Kriesberg, PsyD. She noted that my novel description sounded like a classic example of the trauma she encounters with clients, and healing paths that she guides clients through. Reading a draft reinforced her opinion.

So, in turn, my character, Jody, and I enlightened one another, which led to both of us experiencing self growth—and a new title was born! I’ve since partnered with narcissist abuse coach Tracy A. Malone to create a YouTube video on coping with this topic.

Thanks for inviting me to your blog, Deborah!