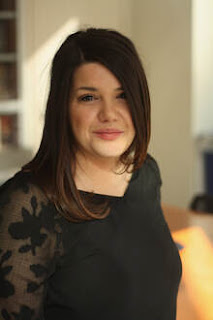 Claire Lombardo is the author of the new novel The Most Fun We Ever Had. Her work has appeared in a variety of publications, including Barrelhouse Magazine and Little Fiction. She is an adjunct professor of creative writing at the University of Iowa, and she lives in Iowa City.

Q: How did you come up with the idea for The Most Fun We Ever Had, and for the Sorenson family?

A: This novel took several years to evolve, and it started as a short story about a woman whose life is upended by the reappearance of the child she gave up. I quickly, though, became more interested in the characters floating around the periphery—the woman’s difficult sister and her loving-to-a-fault parents.

Some of my favorite novels dwell in the spaces of large families—Brother of the More Famous Jack by Barbara Trapido, Love and Shame and Love by Peter Orner, Middlesex by Jeffrey Eugenides, After This by Alice McDermott, to name just a few—and I decided to try my hand at creating my own.

David and Marilyn, the parents, have always been the most distinct characters in my mind, and from there I went on to render their four daughters, and once they existed in my mind and on the page, I was able to put them in spaces together, force them to interact and misbehave and inform each other. 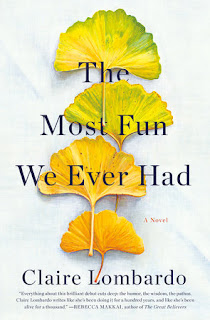 Q: In a review in The Guardian, Hannah Beckerman wrote, "If ever there were to be a literary love child of Jonathan Franzen and Anne Tyler, then Claire Lombardo’s outstanding debut, which ranges from ebullience to despair by way of caustic but intense familial bonds, would be a worthy offspring." What do you think of that assessment?

A: I’m a huge fan of both, so I’m entirely star-struck and flattered beyond compare! Both Franzen and Tyler write the kind of fiction I’ve always aspired to—character driven, patient, and generous, with healthy doses of dark humor and earnestness.

One of my favorite Anne Tyler novels is The Amateur Marriage, and while the central relationship in that book is very different than the marriage at the center of Most Fun, it does so beautifully the thing I’m constantly striving for as a writer—it gives the reader the sensation of existing within another family, privy to the conflicting thoughts and egos and perceptions and insecurities and grudges of its members.

And The Corrections is really just a stunning novel—a deep and comprehensive and funny portrait of a family.

Q: The novel is set primarily in the Chicago area. How important is setting to you in your work?

A: In terms of setting, I prefer to write what I know, even if just for the control it allows—if I set a story in a place I’m familiar with, I’m less likely to get the “if you walk east down that street you’ll run into the library but if you walk west…” details wrong.

But the other reason I chose to set this novel in Chicago is because it’s a really singular landscape, a place like no other (though of course, as a native, I am biased). The Sorensons live in an all-American suburb, but it’s a Midwestern suburb, and that brings with it a host of little nuances: the idiosyncrasies of its residents, the details of the natural world, and the proximity to a big city that isn’t a coastal city.

A: The Most Fun We Ever Had wasn’t the book’s original title, and it took me and my editor some time to land on it. I’ve always struggled with titles, and titling this book felt like a particular challenge because it has so many POV characters and plotlines and time periods and I didn’t want to give due to any particular one over the other. I wanted the universality of the first-person plural, because we do spend our time pressed so closely against these characters, and the book belongs equally to all of their narratives.

The title itself is paraphrased from something Marilyn says as a young mother, when she’s underslept and overwhelmed and trying to keep up appearances, and it becomes a part of her marital shorthand with David. It’s not specifically funny or specifically dark, and that’s one of the main reasons we landed on it—that’s a balance I’m trying to strike throughout this novel, that sweet spot between gravitas and humor.

A: I always have at least two projects going on at once (because I’m a top-notch procrastinator, and if I’m taking a break from one piece of writing to work on another, at least I’m still writing) so I’ve just recently returned to the project I dove into when I was revising and editing The Most Fun—it’s also a family story, but it’s about a very different family from the Sorensons…

A: I was recently asked this question and replied, brightly, “I really like dogs!”, but I suppose this isn’t particularly relevant?!