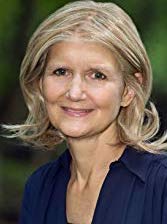 Jeanne Zulick Ferruolo is the author of Ruby in the Sky, a new middle grade novel for kids. She lives in Ellington, Connecticut.

Q: How did you come up with the idea for Ruby in the Sky, and for your character Ruby?

A: There are so many parts of Ruby that come from my life. Ruby, herself, is very shy and doesn’t like to speak in front of people and I was definitely an introvert as a child. In fact, I invented the “trick” of hiding beneath my bangs as a way to disappear.

Nevertheless, the “spark” that really ignited Ruby’s story emerged from a memory of an elderly neighbor who, every afternoon after school, would bring my brother and me to handfeed chickadees at an abandoned house in our rural town. Amidst the noise of my present-day world, I think back to the quiet solitude of those visits – the neglected house in winter and the fact that this lonely man took time to make sure the birds were fed – and I realize how magical it all really was.

Q: The book takes place in Vermont. How important is setting to you in your work?

A: Incredibly important! Ruby is quiet, shy and painfully alone – I love the imagery of Vermont in the winter – dark and isolated. Vermonters are rugged people – it is not easy to get through a Vermont winter, so I also felt the setting helped show how beauty and strength can be found in difficult situations. 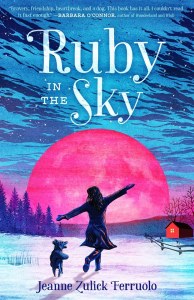 A: I’ve always been fascinated by the moon and its phases play a large role in Ruby’s story. At the beginning, Ruby is trying to stay, “as silent and invisible as a new moon in a frozen Vermont sky.” Throughout the story, Ruby watches the moon grow – from completely dark (a new moon), to a sliver, through the various phases, and culminating in a total lunar eclipse where the moon is glowing red and impossible to ignore. Ruby follows this journey.

I also find the science behind total lunar eclipses so cool. A total lunar eclipse is often referred to as a “Blood Moon,” but I did not like that name at all. I had heard someone refer to it as a “Ruby Moon,” which is so much lovelier. How perfect, I thought, for my main character to have the name Ruby Moon Hayes!

A: Most of all, I want readers to see themselves in Ruby. Sometimes we don’t know how strong we are until we have to face a difficult situation. We are all capable of incredible things. I want readers to know that if they find the right inspiration and the desire to dig deep and find their “own kind of brave,” anything is possible.

A: My next book is titled A Galaxy of Sea Stars and it comes out early next year. Here is the synopsis:

Sometimes, the truth isn’t easy to see. Sometimes you have to look below the surface to find it. Eleven-year-old Izzy feels as though her whole world is shifting, and she doesn’t like it. She wants her dad to act like he did before he was deployed to Afghanistan. She wants her mom to live with them at the marina where they’ve moved, instead of spending all her time on Block Island. Most of all, she wants Piper, Zelda, and herself—the Sea Stars—to stay best friends, as they start sixth grade in a new school.

Everything changes when Izzy's father invites his former interpreter's family, including eleven-year-old Sitara, to move into the marina’s upstairs apartment. Izzy doesn't know what to make of Sitara, with her hijab and refusal to eat cafeteria food, and her presence disrupts the Sea Stars. But in Sitara, Izzy finds someone brave, someone daring, someone who isn’t as afraid as Izzy is to use her voice and speak up for herself. As Izzy and Sitara grow closer, Izzy must make a choice: stay in her comfort zone and risk betraying her new friend, or speak up and lose the Sea Stars forever.

A Galaxy of Sea Stars is a heartwarming story about family, loyalty, and the hard choices we face in the name of friendship.

A: There is no special school you need to attend or degree you need to earn to tell your story. Just be brave and shout it out to the world because the world is waiting to hear from you!