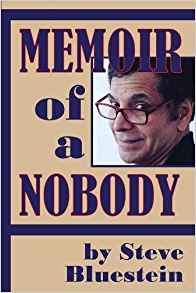 Steve Bluestein is the author of the new book Memoir of a Nobody. He is a comedian, actor, and playwright.

Q: You write, "I wrote these words for you but it is I who has gained the benefit." How did writing this memoir affect you?

A: Coming from a background of a non-supportive family, I have always feared that I wasn’t enough…mainly because I was told I wasn’t enough. And so I carried with me the fears and anxieties all my life that there would always be someone better than me who would take what I wanted.

When I sat down to write this book, it was mainly to tell my show business war stories but as I wrote, things would come up about my childhood and I would deviate from the show business and write about childhood memories. And it was like lancing a boil…the bad stuff would come out and then it was gone.

When the book was finally published the feedback I got from readers was so overwhelming supportive that I was able to see how wrong I had been all my life in thinking of my “less than” being. I grew within me. And so, I wrote the words for the reader but it was I who actually benefited from the experience of sitting down every morning for three years and lancing that boil.

Q: What initially inspired you to write the book?

A: I had done many things in my career and I was never one to toot my own horn. In a business like show business you have to have the ability to step over your loved one’s corpse to get on stage.

I didn’t have that. I was too kind and so those performers with that ability to think of no one but themselves surpassed me. I was afraid as I got older that I would forget my experiences and that what I had accomplished would be forgotten with my senility. And so I set out to document my career. I never dreamed it would be such a life-changing experience.

Q: The book includes stories from various periods of your life. Did you write it in the order in which it appears, or did you write it more chronologically?

A: No, in the preface it states that the stories are not in a chronological order. I wrote as I remembered. It jumps around but it seems to work since no one has even mentioned the order the stories are written in.

A: It really speaks of who I think I am. A nobody. Jay Leno, Johnny Carson, David Letterman, they are a “somebody.” I may have worked for 30 years but to the everyday person I mean nothing…until they get to know me or follow me on Facebook. So "Memoir of a Nobody" truly seemed fitting as a title.

A: Well, I’ve got Another Memoir of a Nobody ready to go when the publisher decides if he want to publish it… and Take My Prostate…Please was just finished last month. It documents my experience and surgery with prostate cancer. (There’s a fun romp through comedy land. Ha!)

But as it turns out I write everything serious with a comic twist and the book is funny and touching (or so I’m told).

And I have several plays waiting in the wings. Alzheimer: A Black Comedy will have its first staged reading on June 10 in NOHO @ the WACO Theater. Rest, In Pieces will be produced in the fall of 2018. This is a play I have had two productions of and am determined to get to New York if I have to carry it on my back myself.

A: Yes, I have a 32-inch waist… 7 3/8 hat… and 9 shoe. I’m a comedian. I see the world through different eyes. Everything to me is fodder for comic material…even prostate cancer. I never try to be mean and my button is disappointment.

Here’s the most telling thing about me. I’m sitting in my office at home, outside the window is a bird in a nest. I just watched as the mother bird jumped in and moved the eggs around. And my first thought was, I wish I had had a mother like that.