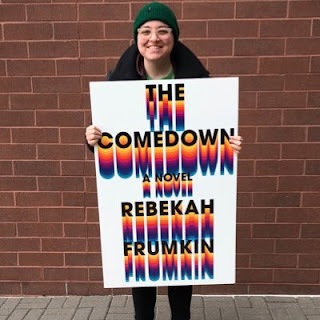 Rebekah Frumkin is the author of the new novel The Comedown. Her work has appeared in a variety of publications, including Granta and McSweeney's, and she teaches writing and literature at Northeastern Illinois University and University of Illinois-Chicago. She lives in Chicago.

Q: How did you come up with the idea for The Comedown, and for the two families you write about?

A: I came up with the idea for something that would become this book when I was 21 and feeling sort of hungover after a night spent in what we'll call "high spirits."

I was sitting on my bed in my dorm room and reading over a scene I'd written about a type-A project manager at a hedge fund who puts on his high-tech performance wear and goes for a run.

How hilarious would it be, I thought, if this guy were my brother? He'd be so angry about my collegiate debauchery. That project manager became Leland Jr. and the college-aged recipient of his animus Lee. That was the origin of the Bloom-Mittwoch family.

The Marshall family came when Reggie, cornered into selling coke, emerged as more than a foil to Leland Sr.'s madness. Natasha had always been around as the arch academic and would-be widow of Reggie, so it only made sense that Caleb, Aaron and their partners should be afforded some narrative shine as well. 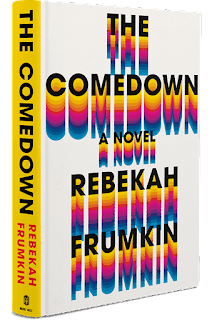 Q: The book includes a large cast of characters and various time periods. Did you write the novel in the order in which it appears, or did you focus more on one set of characters or one time period before turning to others?

A: I definitely divided the novel into cohorts. There's the baby boomer cohort, the gen X cohort, the millennial cohort. It was helpful to confine myself to a certain time period and then just imagine how one would live there.

I didn't write the chapters in the order in which they appear -- I skipped around a lot. But I kept all the characters organized by cohort, which in turn helped me organize my thoughts.

A: I had no idea how the novel would end: in fact, it wasn't until over halfway through the drafting process that it occurred to me what Leland Sr. would do with the money. I actually tried a few endings on for size before I found the right one -- it was a real Cinderella-and-the-glass-slipper scenario.

A: The novel's title, like the novel's ending, was selected after a good deal of trial and error.

Its significance for me is twofold: 1) "come down" as in "fall down" as in "down fall" as in a Sophoclean fall from grace; 2) "comedown" as in "the feeling of withdrawal after a particularly potent drug leaves your system."

Many characters in the book experience one or the other or both.

A: Lots of essays (some journalistic, some personal), and another novel. I've been saying too much about the latter so I'm going to remain silent.

A: Tarz/Tweety/New Person is my favorite character.