Ashley E. Sweeney is the author of the historical novel Eliza Waite, published two years ago, which focuses on a woman who travels to Alaska in 1898. Sweeney is a journalist, teacher, and community activist. She lives in La Conner, Washington. 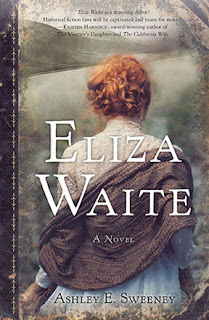 A: Since the release of Eliza Waite in May 2016, I've encountered many women and men who've been touched by Eliza's story. Of the 60+ events since the novel's release -- bookstore signings, historical lectures, extensive travels, book club events -- the most memorable encounters have been in intimate conversations with readers.

One reader expressed her gratitude to Eliza for helping her move through her three-year struggle with grief after losing her husband; she said that she was glad to be "on the far side of grief" after reading Eliza's story.

Another reader told me that Eliza helped her grieve the loss of her adult son, and that seeing the moon each night was a reminder that her son was still with her. Powerful words! In these instances, fiction truly transcended reality. I am honored that Eliza was able to touch these readers so deeply.

Two Alaskan readers also pointed out two minor errors in the novel. Goes to show you that all the vetting and editing in the world won't prevent one or two small glitches!

The novel has also been named the 2017 winner of the Nancy Pearl Book Award and placed as a finalist in the Sarton Women's Book Award and WILLA Literary Award and two other contests.

A: My favorite contemporary authors are Geraldine Brooks, Paula McLain, Sue Monk Kidd, Barbara Kingsolver, and Paulette Jiles, whose News of the World was my favorite book of 2017.

I have a long TBR list and try to read 10-15 novels per month. I just finished reading an advance reader copy of a sister She Writes Press author, Ellen Notbohm, titled The River By Starlight. I loved it.

A: Since my interview with you two years ago, I've finished that second novel, now titled The Illustrator. It's out on review at present. I'm halfway through a third novel centered on the Donner Party and have a fourth in the research stage (that novel will be set in rural Arizona in 1900).

Also, in the past two years, I have added three more grandbabies to my incredible family, bringing the number to six. I'm blessed beyond words.

--Interview with Deborah Kalb. Here's a previous version of this Q&A.
Posted by Deborah Kalb at 5:47 AM