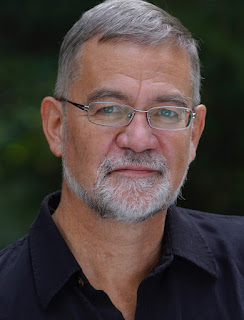 Gary Krist is the author of the new book The Mirage Factory: Illusion, Imagination, and the Invention of Los Angeles. His other books include City of Scoundrels and Empire of Sin. His work has appeared in a variety of publications, including The New York Times and The Wall Street Journal.

Q: Why did you choose to focus on early 20th-century Los Angeles in your new book?

A: I see The Mirage Factory as the third in a trilogy of city books I’ve written for Crown, after City of Scoundrels (about Chicago) and Empire of Sin (about New Orleans).

It’s been fascinating to explore how each city has grown and developed over time, each one coping with similar issues but in different ways, depending on the particular people and circumstances in each place.

What intrigued me most about Los Angeles was the fact that this remarkable urban entity grew up in a place where no city should logically be.

The site was too dry, too far from natural resources and potential markets; it was also isolated by deserts and mountain ranges and without a good deep-water port. And yet it grew from a largely agricultural town of 100,000 in 1900 to a major metropolis of 1.2 million by 1930.

That feat required imagination, not to mention some really unorthodox tactics (including plenty of deceptive advertising), and that’s the story I wanted to tell.

Q: In the book, you look at three people: William Mulholland, D.W. Griffith, and Aimee Semple McPherson. Why did you select them, and do you see them as having anything in common? 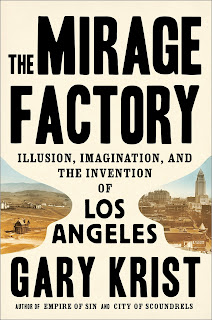 A: I seem them as representatives of the three major factors that allowed L.A. to pull off its growth trick.

Mulholland made it possible for a major urban center to develop in this arid land by imagining and then building a technological wonder—the Los Angeles Aqueduct—to bring water from a distant part of the state.

Meanwhile, the city was limited by a lack of heavy industry, but then a brand-new industry was more or less invented—the movie business. D.W. Griffith was the artist most responsible for turning what had been a vaudeville house novelty into a major money-making and job-creating industry.

And evangelist Aimee Semple McPherson helped to establish the ethos of the city as a place of unorthodox spirituality and unconventional lifestyles—an ethos that drew visitors and would-be residents from other parts of the country in droves. A: I naturally spent an enormous amount of time out in Los Angeles, going through archives and libraries, talking to local historians, and just getting to know the geography and the spirit of the place.

One thing that surprised me is how relatively homogenous L.A.’s population was in the early decades of the 20th century, compared to that of other American cities. Given its current identity as a rich multicultural center, I was surprised that the L.A. of the 1910s, for instance, still lacked large Latino, Asian, and African American populations.

That changed, of course, over the 1920s and 1930s, and especially during and after World War II. But until the 1920s, the city was drawing new residents largely from the white populations of the Midwestern and Eastern states.

Q: You've also studied New Orleans and Chicago. How would you compare the three in terms of their development during this period?

A: Chicago was at the opposite end of the spectrum in this era, with huge populations of foreign immigrants from Europe and African Americans from the South. 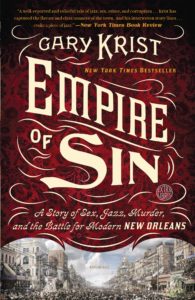 Its growth spurt happened several decades earlier than that of Los Angeles, mainly because it had all of the urban growth factors that L.A. lacked—a strategic location for trade, proximity to natural resources, mature industries, etc.

New Orleans, on the other hand, was another sui generis city, much older, with a French, Spanish, and Caribbean history that created a unique urban environment.

A: I’m just beginning to cast around for my next topic, but I have to say that my curiosity about San Francisco has been piqued by all of the time I’ve spent in California recently.

Talk about another unique city! Thanks to the 1848 gold rush, San Francisco developed much earlier than Los Angeles, but it had to watch its rival to the south surpass it in population and importance in the early 20th century.

I’m not sure yet that I’ve got another big city book in me, but I’m seriously considering turning that trilogy of city books into a quartet.

A: I’ve been amazed at how many people—even people who live in L.A.!—seem to think that the city has no history of any significance, that it sprang up fully formed as an entertainment and cultural capital sometime during the Golden Age of Hollywood.

Granted, L.A.’s history is compressed into a shorter time period than that of most cities, but there’s no shortage of really remarkable stories to tell. I hope I’ve done justice to a few of the important ones in The Mirage Factory.

--Interview with Deborah Kalb. Here's a previous Q&A with Gary Krist.
Posted by Deborah Kalb at 7:33 AM