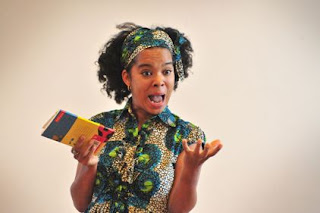 Atinuke is the author of Double Trouble for Anna Hibiscus!, a winner of the 2016 Children's Africana Book Awards. Her other books include Anna Hibiscus and Love from Anna Hibiscus!. She grew up in Nigeria and England, and now lives in Wales.

Q: How did you come up with the idea for your character Anna Hibiscus, and for the latest book in the series, Double Trouble for Anna Hibiscus?

A: For ages I’d been wanting to write about a little girl growing up - as I did - in a busy African city. The name and character came finally when I was stuck in bed, ill and bored - Anna Hibiscus’s name and personality came in a flash - and I had the time while stuck in bed to write the first four stories about her.

I love writing about Double Trouble, the mischief they get into, and it was fun to think about the trouble that babies - so unwittingly - could cause. 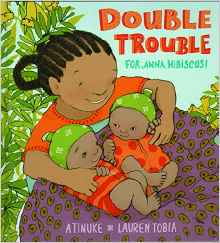 Q: Did you know when you wrote the first book about her that it would be a series?

A: Most of the Anna stories are inspired by my childhood in Nigeria - things that I did, things I wanted to do (but wasn’t brave enough), things that I wished would happen - they all happen to Anna Hibiscus.

I knew when I wrote the first Anna stories that I had lots more about this that I wanted to write - but I did not know then that I’d be lucky enough to be asked to write so many of them!

There are eight Anna Hibiscus books now - the first four are available in the U.S. through bookshops or booksellers...and all eight can all be ordered through the U.K. Amazon site - amazon.co.uk.

Q: What do you see as the relationship between the oral storytelling tradition and your own storytelling and writing?

A: I have been telling traditional oral African stories for 18 years now and undoubtedly they influence my work as an author - and that’s a great thing!

Some of the stories I tell are more than 5,000 years old, created by unknown geniuses and honed and perfected by generations of excellent storytellers. They teach me a lot about life - and I like to think that they make me a better writer too!

Also, maybe because I am a storyteller, as I write I say the words aloud in my head. This also brings a storytelling style to my books especially its rhythm and repetition. 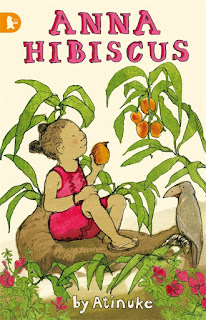 Q: As someone who grew up in Nigeria and England, what do you see as some of the most common perceptions and misperceptions that people in one country have about the other?

A: I wanted to write about a girl growing up in a busy African city because many children I met in England (and elsewhere in the West) thought that life in Nigeria was one of wild animals, mud huts and poverty. Even now children gasp when I talk about drinking Coca-Cola and playing computer games in Nigeria.

On the other hand in Nigeria many people imagine that everyone in England (and elsewhere in the West) is rich, that it’s easy over here to become a millionaire! It can be hard to get people to believe that there is poverty over here too.

A: Right now I’m working on some new picture books - with new characters and a fabulous new illustrator. The first of those will be out next year in the U.K. and the U.S. - and I am so excited about it - it’s a story I’ve been mulling over for years now and it’s wonderful seeing it come to life in such gorgeous pictures.

I’m also working on my first non-fiction project - I won’t say too much about that, as it’s still a long time away from publication - but working on it is satisfying and fulfilling - I love it! 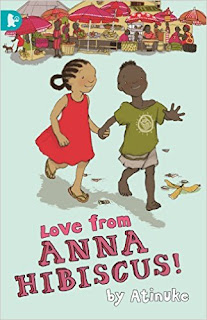 A: I don’t have a study or even a desk where I work. I write wherever I happen to be - in bed when it’s raining, in a hammock when it’s bright, in my favourite armchair, at the kitchen table, in hotel rooms and trains and airplanes. Ideas come to me in floods when I am travelling.

Then it’s a question of discipline - the discipline to spend the hours and days and weeks and months and years that it takes to turn those ideas into stories, and those stories into books. When I get stuck then it’s time to stop working and wander the woods and beaches near my home.

I can’t really separate writing and living - both of them feed and enrich the other. And I can’t imagine a more wonderful job - making up stories and telling them - it’s playing really!