Hassan El-Tayyab is the author of the new book Composing Temple Sunrise: Overcoming Writer's Block at Burning Man, which focuses on his experiences at the Burning Man festival in the Nevada desert. He is the founder of the music group American Nomad, and he is based in the San Francisco Bay Area.

A: The origin of Composing Temple Sunrise came from a blog I was keeping in 2009 about my cross-country road trip. After my experience at Burning Man and Fishbug [a metal art sculpture], I decided to make the blog into a book.

Writing about this journey helped me explore parts of my past and gave me a chance to share how I’ve used travel, music, and community to overcome some very traumatic childhood experiences. Through my writing I’ve gained lots of insight on some pretty complex emotions as I rebuilt my life in the Bay Area.

I had a mantra while writing this book: Start from the truth. I told myself that if I put it down on the page I could always cut it out later. By the time I finished the book I felt comfortable enough with myself to keep that stuff in there.

The message I’m trying to relay is that community, art, and storytelling can heal us, bring us closer to each other, and push us past the limits of what we thought was possible.

I hope people read this book and see a little bit of themselves in the protagonist. And hopefully be inspired to overcome whatever it is they are battling against.

We all suffer from the self-critic and I want everyone to feel less alone in that. It’s a shared struggle that we all face in hopes of creating something unique and beautiful out of life.

I also want to use my story to counter Islamophobia and the master narrative about Arab and Muslim Americans. There is a lot of fear of the “other” in America and whenever people tell our personal stories, we poke a hole in that fear and push back against the “us vs. them” narrative.

I’m hoping that putting this book out there can help make this country a little less hostile to people from the Middle East. I’m also hoping that it will encourage others to write and share their stories too, be it through books, music, or any kind of artistic expression. 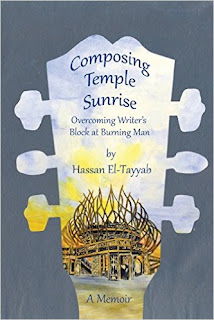 Q: As you mentioned, you describe many painful experiences throughout the book. How difficult was it to write about them?

A: It was very difficult for me to write about much of what I put into the book. The biggest complaint early on when sharing my initial drafts from my first readers was the lack of drama.

My editor told me that I was hiding from the reader. What I had written was basically a chronological sequence of events during my time at Burning Man. And then, and then, and then…

I listened to the feedback, and kept going. I knew I had a story to tell though I had to learn the craft of how to go about telling it. Or should I say, showing it!

I kept pushing and finally realized that probably the most important part of the story was my life before the road trip. These stories give insight to why I was feeling the way I did and why I was on the trip to begin with.

Writing all the backstories felt like peeling back the layers of an onion. Each piece helped me find the courage to uncover the next.

The very last part of my story that I wrote was about growing up with a cleft palate. I had convinced myself for years I’d leave that part out. It was too painful.

My editor Faith encouraged me to include it though. She told me to think about how my story might impact young children growing up with this condition. It wasn’t until a few weeks before I actually published the book that I sent in that chapter to my publisher. Sharing that part of the story is probably the thing I’m proudest of.

A friend of mine once told me, “Run at what you’re afraid of.” Those flashback chapters are my attempt at following his advice. After publishing this book I’ve honestly never felt more liberated in my life.

Q: As a musician and writer, how do the two complement each other for you?

A: My music is really about storytelling, and is fueled by storytelling about my life experiences and stories I pick up along the way from others. Writing the memoir came naturally to me in that light.

During this whole time I flowed back and forth between the two mediums, one fueling the next. And when I wasn’t feeling like writing prose, I jumped back to writing tunes and vice versa.

At a certain point you hit a saturation point and have to put whatever you are working on down. Having this other thing to go to I think acted almost as a pressure release valve and made me more a productive writer in general.

Something I found myself doing was putting some of my lyrics inside the memoir at opportune moments. Sometimes, parts of the memoir found their way into hooks or verses. If you know my tunes really well you could probably find some overlap.

What I think really helped me write the book is that I identify more as a songwriter than a writer. I learned to write in long form through this book because I had a story to tell. Not the other way around.

I think whenever you put a lot of pressure on yourself and tie your self-worth and identity into your art it’s easy to get blocked. The process becomes very tied to your emotional state, which can [fluctuate] from day to day.

I’m a lot harder on myself when writing songs. While writing Composing Temple Sunrise, I actually had fun the whole time. There was rarely a moment during the seven-year writing process that left me in doubt of wondering what to do next.

The book in a way wrote itself. I loved the process of working with skilled editors [who] pushed me to do better as well.

Q: How did your time at Burning Man change you?

A: More so than the experience of going to Burning Man, working on a large metal art sculpture helped me build confidence and develop my sense of self.

Helping to build Fishbug at the metal shop was probably the most transformative experience that happened to me in the story. Learning from the crew and getting some amazing mentoring pushed me to be a better version of myself.

They validated me in a way I hadn’t really ever been validated before. Plus, I could see this amazing sculpture morph and evolve before my eyes in real time. I can’t explain the satisfaction.

Being at Burning Man also helped me see the world in a different way. I think it made me more hopeful about human potential in general. Seeing everyone just doing the hell out of their thing is inspiring.

One scene in the book follows a time where I was trying to write a tune to no avail. Rather than give up, I grabbed my guitar case and walked across the entire playa playing for everyone I could.

This was at a time where I had an extreme fear of performing. The vibe is so open out there I felt safe to express myself to complete strangers. In fact, the size of Burning Man helped with the anonymity. I never had to see these folks again.

And people just gobbled up the music I was playing. Each performance fueled the next and helped conquer my fear of performing and eventually writing.

When I got back to the Bay, I got myself a regular Friday night gig at a café where I continued to work on my chops in front of a live audience.

Now I get up and sing in front of big and small crowds alike with my fear in check. I’ve played at huge theatres holding hundreds of people and even sang on KQED’s radio program Forum, where they get about 25,000 people tuning in about every 15 minutes.

I still get nervous at all of these things, but I handle it and find a way to do my thing! That would have been unimaginable for me before my time working with the Fishbug Crew.

A: I’m working on a few different things. Over the past two years I’ve been working on my first solo album. I’ve had two other releases with a full band but wanted to have a recording I could sell on the road as I travel with the book and play shows solo.

It’s a nine-song record called In the Folds that I believe will be released in the fall. Featured on it is myself on guitar and vocals, my pal Dana on grand piano. It’s probably the best piece of music I’ve ever recorded and I’m pretty stoked to get it out there.

A: I was recently an elected Bernie Delegate and attended the 2016 DNC in Philly. I’ve been a campaign finance reform advocate for a while now and will continue working at getting free and fair elections in the U.S.