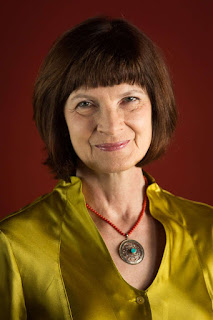 Christine Hale is the author of the new book A Piece of Sky, A Grain of Rice: A Memoir in Four Meditations. She also has written the novel Basil's Dream, and her work has appeared in a variety of publications, including Hippocampus and Arts & Letters. She teaches in the Antioch University-Los Angeles Low-Residency MFA Program and the Great Smokies Writing Program, and she lives in Asheville, North Carolina.

Q: You note that it took a dozen years to write your new memoir. Did it end up the way you originally expected it to?

A: The three "threads" of the book (the story of my growing-up years, the story of the tattoos, and the story of Buddhist retreats) were originally separate writing projects, and many pieces from each thread were published over the years as standalone pieces. The retreats and the together-tattoos were just too odd and interesting (a case of truth is stranger than fiction!) to not write about.

The most difficult material--speculation about the "why" of my parents' miserable marriage and examination of its effect on me--I simply felt compelled to write about as my parents aged and mellowed and died. I got to know them best at the end of their lives, and that emotional shift in me pushed me to explore it on paper. (Like many writers, I "process" by writing.)

I worked at all three threads off and on for years while earning a living and raising my children. I developed a nagging feeling that these apparently separate threads all belonged together, but for the longest time--years--I couldn't figure out how or why.

Only in retrospect is the answer crystal clear: the stories belong together because they are all about reconciliation: me coming to terms with the path I've traveled--and the people I bruised and learned from and was bruised by along the way.

I developed the collage format in order to weave the threads together, and, yes, once I realized that was the structure I was pursuing, I enjoyed the result. I believe it mimics the way we remember--in vivid, discontinuous flashes--and the way we strive to make sense of our pasts--the dots seldom connect completely, but we sense insights, anyway, when we spend time reviewing our memories. 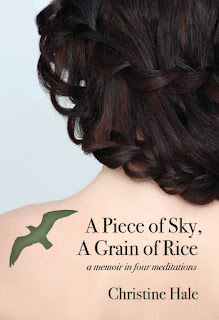 Q: You describe many difficult personal and family experiences throughout the memoir. Have your family members read it, and, if so, what do they think of it?

A: Some have, some haven't, some probably never will, and others may eventually. I've had only very positive feedback so far, from family and from complete strangers.

What's most important when writing true stories about real people (I tell my student memoirists) is to bend over backwards during the process of revision to be fair to everyone you write about. You must try to project yourself inside their doubts, their fears, their motivations.

Otherwise you may be fooling yourself about yourself. You have to be at least as hard on yourself as you are on anyone else; if you want readers to trust you, don't make of yourself either a hero or a victim.

What is equally important is to remind readers at every opportunity that although every authentic memoirist works hard to get the facts right, memoir is inherently subjective. It is the story of a given person's recollected experiences, and we all know that two people present at the same event will remember "the facts" differently, and interpret them differently.

It makes sense to me that people close to a writer of memoir would have different degrees of enthusiasm about the writer and the writing, and thus different degrees of readiness to read that work. A wise writing friend put it this way: "There are early readers for a book, and there are late readers." It's important for writers--and readers--of memoir to know that.

Q: What role do you see Buddhism playing in the book?

A: The most powerful influence of Buddhism on this memoir is in the self-analysis. The true territory of memoir is exploration of the self: who am I, and what are the forces, inner and outer, that shaped me?

A goal of Buddhist practice is to know one's own mind--to become consciously aware of one's particular, recurrent cravings, aggressions, and delusions. 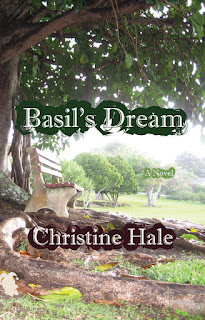 So, once I realized I was writing memoir (my first book was a novel, Basil's Dream), I had no other choice, as a student of Buddhism, but to examine with the most stringent honesty I could summon my mind, my actions, my motivations, and my judgments. This process was sometimes pleasant, often harrowing, and always, ultimately, rewarding.

A: The book's title arises from a moment during a Buddhist retreat (p. 80) when my Buddhist teacher wordlessly--and for that reason very memorably--provides me an insight about the nature of reality by playfully tossing grains of rice at a misbehaving child.

At the end of that retreat (p. 96), I recall the teacher instructing me, again wordlessly, to look at the sky as a reminder of impermanence and equanimity. The sky is spacious and clear, always, even though angry or sublimely beautiful weather plays out on it moment by moment.

Of course it is not necessary for readers to pick up on the meaning of the title. Those who are familiar with Buddhist teachings will quickly identify the familiar symbolism of rice and sky. But those unfamiliar with Buddhism may still enjoy a sense of peace when the sky is invoked, along with a sense of curiosity about the grain of rice, and its relationship to a piece of sky.

A: The work on the back burner right now is a set of linked stories, set in a fictional small town in Western North Carolina. All the stories take place in or have a seminal scene in a small, dumpy house with bad plumbing, built in the ‘40s and built-on ever since, inhabited by several generations of a working class family. The first of these stories, "Lake Tomahawk," has been published by Calyx Press; you can read the full text here.

I grew up in southern Appalachia, and although I got myself out as fast as I could in my teens, and lived thereafter in New York City, Bermuda, and Florida, I came back to the region by choice about 10 years ago.

There's a saying in Appalachia that you shouldn't try to "get above your raisin'." I have, and I haven't, and both the memoir and the fictional stories I'm working on now are rooted in that personal conundrum, as well as the broader sociopolitical question of how this part of the South both is and isn't evolving past its history of exploiting and being exploited.

A: I want readers to take away a feeling that they are not alone in their doubts, fears, confusion, strivings, and hopes. That these feelings are the essence of being human.

I often hear from readers that they identify with the struggles and the triumphs in the book, that they are reminded of their own sweetest memories, that they feel reconnected with people they've lost, or that they have new insight into someone who was a powerful and painful mystery in their life.

It's amazing and satisfying that readers can get from the book their own personal version of what I got from writing it--clarity and release.

People can learn more about me and my work at www.christinehalebooks.com. A Piece of Sky, A Grain of Rice: A Memoir in Four Meditations is available through independent booksellers anywhere, as well as from the publisher (Apprentice House Press in Baltimore), and online at IndieBound and Amazon.