Gianna Marino is the author and illustrator of the new children's picture book Waiting for Mama. Her many other books include Just Like My Brother. She lives in Colorado.

Q: What inspired you to create Waiting for Mama?

A: I am fascinated by animals, especially their instinct for survival through migration, moving during harsh weather or for better feeding grounds. I had been wanting to write something on a great migration, but instead came across the non-migration of Emperor Penguins, who breed and care for their egg in the harshest climate in the world.

We have all heard the Emperor Penguin story before, but researching the way the egg is cared for by the father penguin while the mother goes to feed, for four months, made me wonder how that chick felt inside the egg.

I imagined it powerless and feeling the cold and hearing the sounds of storms and the other penguins. But also feeling safe and loved by the papa while waiting for the return of mama.

Q: Did you need to do much research on penguins to write and illustrate the story, and did you learn anything that especially surprised you?

A: I do a lot of research on the animals I am writing about. Even if I don't use all of the facts found, I find it gives me a good feel of their character. Ideally I like to visit them in person (and I have always wanted to go to the Antarctic....), but sometimes I have to get by with books and other research already done.

I learned that the sounds are very important to the baby penguins. Each mama has a different call and, although they all look exactly the same, the sounds distinguish them from the hundreds of babies and they manage to find one another. Even after four months of separation and the chick likely only hearing their mama's sound for just a short time before she leaves to find food.

Q: What was your process for creating the illustrations?

A: When I started the sketches for this book, which were just pencil with no color, I thought about what colors would help tell this story. I didn't want to create a book that was all black and white (penguins) and blue (sky).

I researched more about the colors that ARE there, since most photos of the area are taken in daylight and not in the middle of the many storms that blow through the area! I included stormy, grey surroundings, and clear nights with a million stars, pink morning sun and of course the aurora australis. I also played with shadows across the ice, as these are BIG birds!

I closed my eyes while sketching the egg, imaging what it would feel like to be curled up in a shell and moved around, hearing sounds and feeling the cold of the ice and the warmth of papa's belly.

Q: How would you describe penguin family dynamics?

A: These animals are truly incredible. The dedication to raising their chicks is beyond anything I have ever learned in regards to chick-rearing. After the egg is hatched, the mother leaves for four months while the papa cares for the egg, without food. 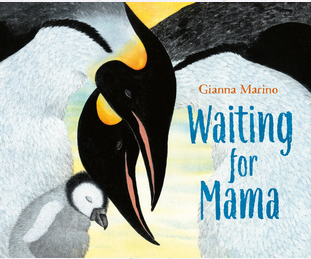 This is in the middle of their winter, so there is little warmth or even light from the sun. They have to balance the egg on their feet the entire time, through blizzards and hurricane force winds. Even a short time on the ice would kill the chick from freezing.

When the mother returns and finds her baby among the hundreds of look-alike chicks, her chick is quickly transferred onto her feet and off papa goes to find food. Their timing is incredible. If the mama does not arrive soon after the egg has hatched, the baby will die of starvation. They are a dedicated family!

A: I have a few books in the hopper, but the one I am working on now was inspired by a rabbit named Earl. He was living under the deck of a cabin I was using as an art studio in Wyoming. Of course he was afraid to come out because of all the predators out and about.

Earl somehow, in my new story, morphed into a prairie dog. Likely because in my new location in Colorado they are EVERYWHERE.

The story follows Earl and his friends, who love to play outside. But Earl is concerned about everything and has a fear of the outdoors. His friends help him see the beauty of the outside. It feels relevant these days...

A: This is not exactly about the creation of Waiting for Mama...but it is about the art. In early April, when the book had just been released, I was staying in Santa Fe, New Mexico, on our way up to Colorado.

My publisher had just returned all of the artwork from Waiting for Mama and because we have been mobile and moving and all over for the last year, it seemed safe in the back of my car. Out of sight and nicely packaged.

I still do original art; gouache on paper. These 20 illustrations took over six months to complete. I am a city kid (grew up in San Francisco) and have always been vigilant about locking my car.

One night, I woke at 4am and realized I had left it unlocked. I almost went outside to lock the car, but I thought, “Oh, it is fine. We're in a fine neighborhood, on a cul-de-sac.... what are the odds of a theft ONE night out of many!”

In the morning, I saw the back seat pushed forward before I even opened the car. Everything, including the art, was gone. I was devastated and could not imagine I would ever see it again.

I filed a police report, searched the neighborhood, went to pawn shops, posted all over social-media and, luckily, also got a lot of press. There were articles in every newspaper and even a spot on the evening news.

For a month, nothing happened. Then a text came in, clearly the thief, wanting the $1,000 reward in exchange for the art he “purchased on the street.” At that point, I turned it over to the police. They set up an undercover sting operation and, a week later, tackled two guys! I guess having your art stolen in a very art-friendly town makes a difference!