Morgan Talty is the author of the new story collection Night of the Living Rez. His work has appeared in a variety of publications, including The Georgia Review and Shenandoah. A citizen of the Penobscot Indian Nation, he lives in Levant, Maine.

Q: What inspired you to write Night of the Living Rez, and how did you create your character David?

A: Part of my inspiration was that I just simply wanted to write. What, exactly, I didn't know until I had started writing and had material.

When I first started writing, I wrote mainly autobiographical pieces--memoir, mainly. But I started to find myself in moments where I could use imagination in a way that turned the nonfiction into fiction, and so I started to gravitate more toward fiction.

With that, Night of the Living Rez has some biographical elements to it--tiny moments here and there--and so the other part of my inspiration for writing this book was I wanted to explore the emotions of these characters as they were sort of like myself or those I knew and loved and cared for.

When it comes to David, he was--many years ago--a version of myself in my very early fiction, but I chose to keep his name the same as I got better as a writer and began to write purely fictional works. So, in many ways, I created David out of my past writing experiences and developed him with the other characters in this book.

Q: The writer Tommy Orange said of the book, “There is so much brutal, raw, and beautiful power in these stories. I kept wanting to read and know more about these characters’ lives, how they ended up where they ended up, how they would get out, how they wouldn’t. It is difficult to be so honest, and funny, and sad, at once, in any kind of work.” What do you think of that description?

A: It's so kind! Tommy is wonderful, and to hear him say this about my work makes me feel good. I feel like I produced something that is important in the larger dialogue of Native American fiction and literature in general.

Q: Your publisher Tin House's editorial director, Masie Cochran, wrote that you told her, “I wanted to write a collection that corrects or revises ideas about indigeneity while also highlighting my tribe, the Penobscot, who have been ignored just like many of the 570+ federally recognized tribes and the many unrecognized ones.” Can you say more about that? 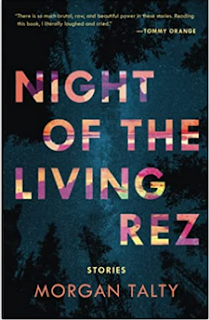 A: At a certain point in my fiction--when it comes time to revise and work outside of what may be self-interest--I have to look for opportunities--natural ones--in the prose where I can take advantage of themes or ideas, and one I was actively looking to enhance and make clear is this idea not all Native people are alike, that what's unique for one tribe isn't unique for another.

There are so many Native people out there, and it's time the general population knows about them, not as a subject of study but as fellow human beings.

Q: Did you write the stories in the order in which they appear in the book, and how was the book's title chosen?

A: I did not, actually! The very first story I wrote for this collection was "Night of the Living Rez." It looked much different in that early draft (I wrote it in 2015), and I only revised it later as I put this collection together.

My original intention--or approach, is a better word--was to write a story collection about David and his family, and it made sense for me to start at the beginning. "Night of the Living Rez" was, in my mind, the final story I would end with, and so I set out writing. I wrote "In a Jar" and then kept moving chronologically.

I ended up with about 15 or 16 stories told from David's perspective, and out of that bunch maybe five were good. After being discouraged, I stumbled upon this character named Dee, and that brought the collection back to my life and gave me a purpose for the whole book.

I wrote those stories all out of order, and it was only later--when it felt done--when I went back and moved stories around to make it flow and match what I was going for in regards to the larger narrative arc.

As for the title, all credit goes to my former mentor, peer, and friend Aaron Hamburger. He was a mentor for my final semester during my MFA, and when we put the collection together it was originally titled The Little Yellow House: Stories, but Aaron pointed to "Night of the Living Rez" and said, "Now that's a title." Thanks, Aaron!

A: I'm currently polishing up a novel called Fire, Exit, as well as working on an essay collection (memoir material) that explores my family.

A: A lot of the themes in Night of the Living Rez revolve around addiction and mental health, and so I'm always advocating that we support programs that are trying to help people who are suffering. And so I feel compelled to urge people to support local facilities by donation or volunteering. Kci-woliwoni--thank you!