Monica Zepeda is the author of the new young adult novel Boys of the Beast. Also a screenwriter and a librarian, she lives in Los Angeles.

Q: What inspired you to write Boys of the Beast?

A: My own nephews inspired Boys of the Beast. They’ve all had very different lived experiences, and I wondered what if? What if they hadn’t grown up together? What would they talk about? What would the dynamics be? So that was the starting point for me.

Q: How would you describe the relationship between the three cousins, Oscar, Matt, and Ethan?

A: I wanted the cousins to be strangers at first, even though they are related. Their moms are sisters, but they’re not close. And I chose a road trip to force the boys to be together and talk to each other.

It was important to me for them to talk about everything – from what kind of music they liked to bigger topics like religion and mental health. It allows them to get to know each other and find common ground so at the end they feel like a real family. 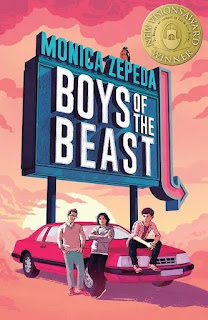 A: I knew the boys’ final destination from the beginning, but I wasn’t always sure what would happen when they arrived there. I did write it linearly, so as the boys’ journey progressed, I had a clearer idea of how it would end. I did know that I wanted a hopeful ending, which I think I delivered.

Q: Do you have any other favorite road trip novels?

A: I purposely stayed away from reading road trip novels because I didn’t want them seeping into my subconscious. But I love Libba Bray’s Going Bovine, which is kind of a trippy road trip novel.

A: I’m writing another YA novel, but this one is historical fiction. It’s inspired by my uncle, who was exposed to chemical gas experiments by the U.S. military while he was a soldier during World War II.

It’s also going to cover major events in Los Angeles during the 1930s and 1940s, especially the Zoot Suit Riots. Boys of the Beast deals with personal trauma, and this one is about dealing with national trauma.

A: I had a lot of fun creating a playlist for Boys of the Beast, Ethan’s Road Trip Mixtape, which you can find here: https://open.spotify.com/playlist/4H4S70bl1PYjiB7HMKA6Ox