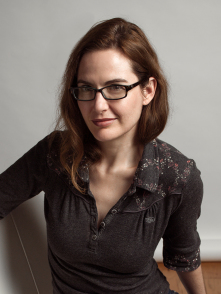 Lenore Appelhans is the author of the new children's picture book The Family Business. Her other books include Chick-O-Saurus Rex. She is based in the Washington, D.C., area.

Q: What inspired you to write The Family Business, and how did you create your character Lucky, a raccoon?

A: I started writing what would eventually become The Family Business way back in 2004. The earliest draft revolved around a raccoon named Ezra who found a treasure in a trash dump and was inspired by a news article about a scavenger finding a rare Beatles album in someone's trash.

Lucky developed over the years (13 years with critique groups and workshops and four with my wonderful editor Jill Davis) and drafts (probably over 200 drafts in all) into a character with a strong sense of self who nevertheless still longs to fit into his family. 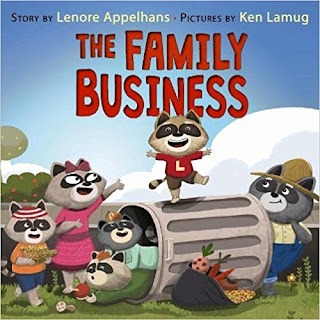 Q: What do you think the story says about raccoons?

A: The idea that the raccoon family is a part of a crime syndicate is a tongue-in-cheek look at how humans negatively respond to completely natural behavior on the part of the raccoons. Animals are just trying to survive!

Q: What do you think Ken Lamug’s illustrations add to the book?

A: We really lucked out getting Ken to illustrate. All the spreads are delightful, and there's so much attention to detail.

A: The central tension of the book is Lucky looking for a way to remain true to his values while also fulfilling his role as part of a family. Kids often have this same tension in their own lives, so this book shows how creative solutions are possible. It's also just fun!

A: I have all sorts of projects in various stages of the pipeline. Let's hope some of them make it all the way to publication soon.

A: Picture books are an art form and persistence can pay off. I'm so thrilled to finally introduce Lucky to the world!