B.A. Shapiro is the author of the new novel Metropolis. Her other books include the novel The Art Forger. She lives in Boston and in Naples, Florida.

Q: What inspired you to write Metropolis, and how did you create your cast of characters?

A: I was inspired by the combination of a video (The Race of Life), a novel (Let the Great World Spin), a documentary (Finding Vivian Maier), and an article in The Boston Globe about an unusual self-storage facility in Cambridge, Massachusetts.

The Race of Life provided the theme (lifetime effects of childhood economic status), Let the Great World Spin suggested the structure (an ensemble cast of characters who wouldn’t have known each other without their connection to a mysterious event/place), Finding Vivian Maier inspired the artistic twist (street photography), and the Globe article gave me the place to put it all (Metropolis Storage Warehouse).

Q: The writer Mary Morris said of the book, “In Metropolis Barbara Shapiro is the literary equivalent of a master juggler. Written with tremendous compassion and a wonderful knack for storytelling, her characters whirl together within the confines of a self-storage unit. Though at its core it’s a mystery, its beating heart is their stories.” What do you think of that description?

A: I think it’s one of the most wonderful things anyone has said about this book. I consider myself a natural plotter, but I struggle with character. For Mary Morris, whose characters jump out of her novels and into your heart, this is high praise indeed. 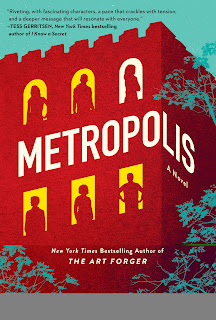 Q: In our previous interview, you described Metropolis as “completely different from anything I’ve ever written before.” Can you say more about that?

A: One unusual thing about Metropolis is that I started with theme. Usually theme is something that grows out of a work as I create it, but I was so taken with the idea expressed in The Race of Life—the starting line in life isn’t the same for all of us—that I wanted to create a story that wouldn’t slam the reader over their head with the concept, but would cause them to consider it.

A: I usually do at least six or seven full drafts of my novels, with each page rewritten at least 20 times over the three to four years it takes me to write it. Metropolis required even more rewrites, so although I knew what the ending of the first draft would be when I started, I didn’t know the ending of draft number 10.

A: Another novel that’s also completely different from anything I’ve written before: a legal thriller/psychological suspense/murder mystery. Working title: Multiplicity. It also has six viewpoint characters, but four of them are the same person. Or not.