Lisa Russ Spaar is the author of the new novel Paradise Close. Also a poet and essayist, her other books include the collection Madrigalia. She is Professor of English and Creative Writing at the University of Virginia.

Q: You’ve said of Paradise Close, “This novel began as two separate projects, and it took me a while to realize that I was really writing one contrapuntal story.” Can you say more about the relationship between the two stories?

A: What my friend, the poet Charles Wright, says about his own poems written over his long literary career is that each of us has maybe four or five “stories” to tell—in his case, these might be stories about the Appalachian South, God-hunger, a poetics of the backyard and of what he calls “looking around”—and that as poets and prosers we just keep writing toward and out of these obsessions (Emily Dickinson calls these sorts of obsessions “Flood subjects”) all of our writing lives.

The part of Paradise Close that is now Part Two is actually the project I began working on first, in my own early- to middle-age, and its preoccupations and main characters were also, for the most part, concerned with exigencies—aging, desire, the ramifications and consequences of earlier choices—that typify that time of life.

A few years later, I began working on a second project, which is now Part One of the novel. In this project, the main protagonist is an adolescent girl suffering from anorexia, and I think I leaned into prose because I wasn’t finding a way to write about her story in the kinds of poems that I write, which tend to be brief, lexically dense, sonnet-haunted lyrics. I found I needed more room, more duration, for other characters to bloom around and through her.

I think I had an “ah-ha” (or maybe I should say a “duh”) moment while parking my car at a local shopping center, when I realized that the obsessions, the flood subjects, of the two separate projects “rhymed” in many ways—both were deeply concerned with time’s passage, heartbreak, illness, survival, desire, place, change. And with what it means to live and grow over time, in a body.

And so at that point I began to think of the two stories as one project, and then I loved working the two distinct projects—and, I hope, the “so what?” of their connections—together in Part Three, making the novel into a triptych of sorts.

A: I think one blessing for me, one reason I could risk this attempt at another genre, is that I didn’t really set out to write a novel. I certainly didn’t know what I was doing. I was just trying to grapple with material that I couldn’t for one reason or another work into the poems.

So I would make forays into these prose projects in the summers, mainly, and meanwhile continued to write and publish books of poems, to edit two poetry anthologies, all while teaching full-time and doing a lot of administrative work. Oh, and getting my own three children “launched” into the world as well.

This is all just to say that by the time I’d written 60 pages or so, maybe more, for each of the two projects, it had all been happening in the margins and in the interstices of my life. And so it wasn’t until that ah-ha moment, parallel parking at the Barracks Road Shopping Center,  maybe five or six years ago, that I began to imagine that I might have a novel in the works. 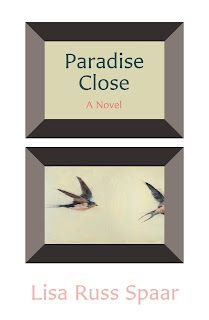 With some notable exceptions—one of them being my luminous colleague at UVA, Rita Dove—poets tend to fly below the radar in the reading/publishing world. A poet more or less quietly finds her readers, just as she finds her own poets to read in return.

I had two terrors about trying to see if Paradise Close should leave the confines of my laptop.  One:  was it really a novel? And two, how would it find its readers? Maybe that will happen in just the way it happens for poems. . . . for a writer of my temperament, anyway.

A: I did not see the ending until very close to the end, after I’d written the better part of Part Three (and now that I think of it, I remember “seeing” how the book would end while trawling the aisles of Whole Foods (or “Whole Paycheck,” as a friend calls it). I had to pull over to the salsa shelves, stop the cart, and text the idea to myself. I’m wondering now what it is about errand-running that is so conducive to these kinds of epiphanies for me?).

And, with regard to the whole book, oh, yes, many, many changes! Many! In some ways, I think I know the twists and turns of every sentence in Paradise Close better than I know most of my poems.

Virginia Woolf says somewhere, in one of her diaries, that she writes toward rhythm, not plot.  Plotting: so hard. Perhaps especially so for a lyric poet. But while attempting to make the stories in Paradise Close move, it was also important to me that the sentences had cadence. In a way, they’re inextricable from plot, at least for me.

A: Sven Birkerts says somewhere, I think in The Gutenberg Elegies, that we read for the delicious excavation of the self in another’s sentences. “I read books to read myself,” he writes.

In my deepest reading experiences—novels, plays, short stories, poems, essays—I am galvanized and transported: by the language, by the quality of mind of the author, the spell cast by the energies—issues, characters, tensions—at play.

I emerge from this kind of reading transformed, possessed in a way, the way one feels sometimes coming out of a dark movie theater and into the light of day. If any reader feels that way after passing through the world of Paradise Close, emerging with, perhaps, a lingering sense of having been seen and/or of seeing human beings, the self, anew, well, that would be a great honor.

A: It’s summer, so I have a bit of a respite from teaching and administration. I’ve been working on another longer prose thing—I have about 60 single-spaced pages underway. I wrote two short stories this summer, something new for me. And I have written some poems as well.

I’m also Nanalisa to three grandchildren aged 18 months and younger, so I’m spending a lot time by the wading pool in the yard. I’ve memorized The Very Hungry Caterpillar (“The caterpillar ate through one nice green leaf, and after that he felt much better”).

I’m also spending time helping my 89-year-old father with his huge vegetable garden. This past Sunday, we harvested 90 ears of corn, and that’s just from the first planting.

A: A cooled-off, fresh ear of boiled corn, stripped of its kernels, makes a great baby teether.

And many, many thanks to you for taking an interest in Paradise Close!