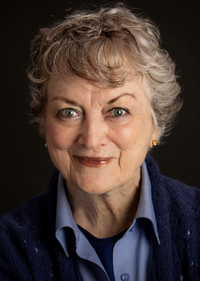 Ann Medlock is the author of the new novel Silence of the Seamaid. Her other work includes the book Arias, Riffs and Whispers. She also has worked as a publicist, actor, speechwriter, and teacher, and she founded the nonprofit organization the Giraffe Heroes Project. She lives in the Pacific Northwest.

Q: Your website describes Silence of the Seamaid as a roman a clef--can you say more about how you created your character Lee Palmer?

A: She is who I was and, at points, who I wish I had been, and at others, she's even more messed up than I was. Despite the current popularity of memoir, I chose this traditional road of making a novel out of my own experiences and my observations about them.

It’s been quite a topic here as my guy wrote a memoir at the other end of the house. Reading his drafts I kept saying things like, “You put quotes around something somebody said 40 years ago! There’s no way you remember that exactly.”

Me, I’d rather admit I’m making stuff up. And, as you see in the admission on an opening page, that involves a lot of lying and stealing. I often combined three/four actual people into one, set real incidents in fewer physical locations than where they really happened, made up stuff nobody ever said.

And, thanks to a marvelous editor, I totally invented the Knight’s Gambit courtship. Said editor insisted I had to give the reader a chance to be charmed by meeting “Joe” so they could understand why such a smart woman would be attracted to him.

Q: The writer Susan S. Scott said of the book, “Medlock's protagonist is a female, modern-day Odysseus... her complex and varied adventures are not about conquering kingdoms or blinding Cyclops—they are about learning how to live one's own life with the utmost authenticity and integrity.” What do you think of that description?

A: I hadn’t looked at the book as that Jungian therapist did, so I found her reaction fascinating. Maybe accidentally writing archetypically helps more people identify with the story. 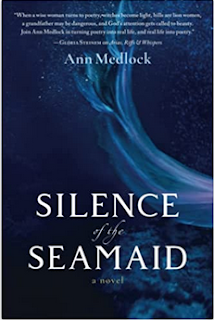 A: Silence because Lee keeps not saying what she’s really thinking.

...because the Little Mermaid agreed to be silenced in her insane pursuit of her not-too-bright prince.

...because Lee didn’t defend herself until she realized she’d been silenced by letting that awful story program her life.

...because too many women have silenced themselves, even Elizabeth I, one of the most powerful women who ever lived.

...because it’s still a huge problem in the world, with women being told to sit down and shut up.

Seamaid because Shakespeare used the term and I liked it better than Eliot’s “sea-girls.” (Yes, I was an English major.) And because “mermaid” makes people think of Disney’s silly movie. And I like the alliteration.

A: I know it’s already led two people to get the hell out of godawful relationships (because they wrote to me). Short of that, it would be grand if people looked at what they might be doing that doesn’t make any sense, that’s destructive to themselves and/or to others.

I’d love for people to adjust what they say to kids, realizing from Lee’s story how deeply they may affect the kids’ lives.

And hey—there’s a lot to be said for being engaged and entertained. I like it when people say they’ve just enjoyed the book.

Several young women have assumed I made up the misogyny-at-work stuff. It’s good to tell them Hell no. That really happened. Don’t take what you’ve got for granted, or assume you don’t have to fight for it. Vide losing choice. Oy!

A: I just finished what might be considered a message to the world. It’s here: https://www.annmedlock.com/bread-crumbs

The largest thing now is an actual memoir of one experience, working from piles of notes and photos to record something that’s really important to the world.

Building with Christopher Alexander, An Illustrated Memoir is intended to add to the huge body of work by and about him. Nobody’s written about what it’s like to build a house with him, as did the guy who wrote Building with Frank Lloyd Wright.

What I have so far (a lot) is here: https://www.annmedlock.com/building-with-christopher-alexander

Wearing the social entrepreneur hat I put on 40 years ago, I’m still writing heroes’ profiles. Working on 11 new ones right now. Lots of them are here: https://www.facebook.com/giraffeheroes

I sometimes write poems because they seem the only way to deal with what I’m thinking. The one that’s almost done now is a response to seeing via ancestry.com the ledgers of my own slave-dealing ancestors.

A: That I’m ancient? That their assumptions about age may be wrong? This script popped into my mind at 3 am. Couldn’t stop laughing: https://www.youtube.com/watch?v=hIMDGCL5sog