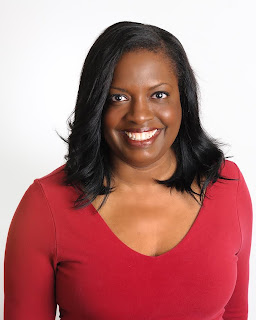 Rachel Howzell Hall is the author of the new novel We Lie Here. Her many other books include Land of Shadows. She lives in Los Angeles.

Q: What inspired you to write We Lie Here, and how did you create your character Yara?

We all assume our families are boring… until someone accidentally shares the wrong story, until you get DNA testing results or until you discover someone’s name missing on a birth certificate.

I wanted Yara to be a storyteller, a woman who loves story but doesn’t even know her own story yet. She’s a woman paid to put words into people’s mouths, but at home, in Palmdale, she’s often rendered speechless. She knows so much, and yet…

I aimed for the Gibson family to be different than the Lamberts in These Toxic Things. Even with all the crazy swirling around her, Mickie knew that her parents were a harbor in life’s storm. In We Lie Here, Yara isn’t so sure of that.

Q: The Publishers Weekly review of the book says, in part, “Hall exhibits a mastery of slowly building pressure-cooker tension until it explodes.” What do you think of that description, and do you know how your books will end before you start writing them?

A: I absolutely love the slow build, and I’m thrilled that PW described my stories that way. I believe real life, for the most part, has pressure-cooker tension. Life is all about the “and then what happened, and then, and then, until BAM,” and we’re left to pick up the pieces… unless we don’t pick up the pieces.

People bend and adapt, and there are times that we don’t know that our bands are about to snap but the signs are there. What happens once that band snaps? It’s all about the pre-snap – is it going to snap now? Now? What about now? 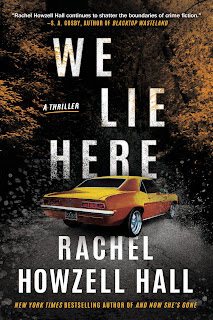 Dread, in some ways, causes more havoc than fear. Life gets more unpredictable as people try to deal with life before the Big Event actually happens.

And that’s what I wanted for We Lie Here. The Gibson family has adapted to living in a desert. They’ve adapted to the city’s residents.

Yara has moved away from all of that but has now returned. Will she shift back into her Palmdale way of thinking or will she flip out? Will her mother re-adapt? Her sister? What happens when secrets slowly reveal themselves? Who will do what?

I knew only one thing about the ending – and that a long-held secret would finally be revealed on the very last page. As I outlined and completed the first two drafts, the ending filled out more.

A: The original title was Here We Lie, and my wonderful publishers thought switching it to We Lie Here was more accurate and played up a few aspects of the story.

Since this is a book about discovery and families, I thought the word “lie” would be the “boom” word. And I think it’s a great word for the title because I get confused (like so many people) about “lie” and “lay,” and that confusion is perfect for a story about origin stories.

Q: You’ve written, “People--family--do strange, dangerous, awful, unbelievable things to each other.” Without giving anything away, how does that apply to the novel?

A: Ha – I’d give it all away going further than that. But it really is just that: think about growing up, and remember arguments in your home between parents, siblings, or other family members. Remember the harsh words, destroyed property - even if it was a skirt or a pair of shoes.

Some folks grew up with outwardly awful people, the kind who hit and cursed. Some grew up with passive-aggressive types who kept tearing away little parts of you. You never realized those little bites had become as large as a shark bite until you find yourself in therapy.

We Lie Here is about those small bites, those small crimes (as well as some bigger ones). An example that captures this perfectly: Yara is asthmatic, but her mother still smokes around her – a dangerous, awful and unbelievable thing a mother does to her daughter.

A: I just turned in my next story, What Never Happened, to my editor just a few days ago. It’s another discovery story. This time, a young obituary writer returns to Catalina Island to figure out the truth behind her family’s murder on that same island 20 years ago.