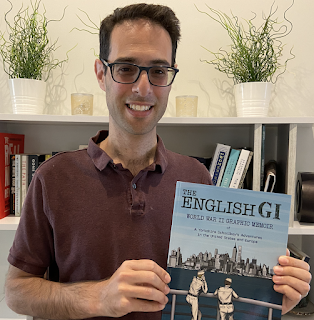 Jonathan Sandler is the creator of the new graphic memoir The English GI. It focuses on his grandfather's experiences during World War II.

Q: Why did you decide to write this graphic novel based on your grandfather's experiences in World War II?

A: My grandfather, Bernard Sandler, had a unique World War II experience. He was stranded as an English schoolboy in New York at the outbreak of war. He ended up serving in the US Army as an English Jew. I really wanted the story to be retold.

I’d always been a fan of graphic novels and decided that a more visual frame-by-frame account would make the story more accessible to a wider audience. In particular, I really wanted to evoke the atmosphere of 1940s New York. 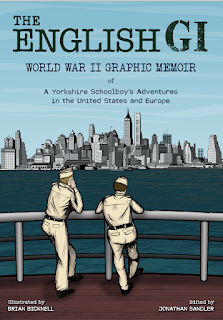 A: I was fortunate that my grandfather had written his memoir in 1994, so I had a primary source. To help me enrich the content and plug gaps in the story, I read a number of personal memoirs from other veterans who served in the 26thh Division of the US Army at the same time.

The most astonishing discovery was the Victor Lundy sketchbook. Lundy, who served at the same time as my grandfather, had drawn out hundreds of sketches of life at war. A few years ago, he donated his amazing sketch book of all his drawings to the Library of Congress.

Clearly, there were no photographs of his time at war, but finding these amazing sketches was an amazing source, especially for a graphic novel.

Q: How much did you know about his experiences as you were growing up?

A: As he had written his book in the early 1990s, I knew a great deal, but he didn’t discuss it in detail. Now, of course I wish I had asked him more. I have a lot of the facts of his WWII experience but I would have wanted to have dug deeper to understand how he felt at key moments. 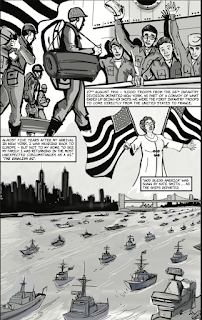 Q: How did you, illustrator Brian Bicknell, and designer BK Suru collaborate on the book?

A: My role was to research and identify images that I wanted to use in the book. I would then use these to mock up how I wanted the page to look. Brian Bicknell would then turn the vision into reality. The collaboration worked really well. In some of the sketches, we used the Lundy drawing which I mentioned above.

My grandfather departed New York City for France in August 1944, as part of a convoy of 100 ships. The first Infantry troops to have left the USA for France directly in WWII. This must have been quite a spectacle, and the front cover of the book is inspired from one of the Lundy sketches.

BK Suru helped with overall design of the book including the font and front cover giving it a vintage feel.

A: Having completed The English GI, I am enjoying reading other graphic novels and WWII stories. I am always on the lookout for the next project. There are still so many stories from World War II that have yet to be told and I think the graphic memoir format is a unique way to do this.

A: My grandfather was an English Jew who fought for the US Army in World War II. I was keen to explore his Jewish heritage, including the fate of his wider family in Latvia. I also included some scenes in the book that emanate from the accounts of US Jewish soldiers that served in 26th Division, to help enrich the content.