Susan Thistle is the daughter of the late Mary MacCracken, the author of the new book The Memory of All That: A Love Story about Alzheimer's. The book focuses on the relationship between MacCracken and her late husband, Cal, who had Alzheimer's.

Q: What inspired your mother to write The Memory of All That?

A: When my mother’s beloved husband Cal, always a fighter, first learned his diagnosis he announced, “We’ll beat Alzheimer’s and then we’ll write a book about it!” My mother had written four earlier books about working with autistic and learning-disabled children that were widely read, and Cal had written one about how to succeed as an inventor.

My mother knew they couldn’t stop the disease. But she supported his courageous response and found ways to help him continue to enjoy life despite his failing mind.

In the silence of a Quaker memorial service for someone else with Alzheimer’s, she resolved she would indeed write the book. “It might be something I could give to others,” she thought. She also saw it as a promise she had made to Cal.

After losing him, after her grief lessened, she worked on the book almost every day until the last months of her life, polishing and perfecting it. It kept her close to Cal.

Q: How would you describe the relationship between your mother and Cal?

Once a bus driver, taking a turn too widely, ran into my mother’s car, but insisted it was her fault. Cal, listening as my mother tried to explain this, said, “Mary, just know whatever happens, I’m on your side.” This meant a lot to her. No one had given her such unconditional support before.

When Alzheimer’s hit, they faced it in the same supportive way they had handled earlier setbacks in their lives. My mother was resourceful in finding solutions to the problems that arose, like laying Cal’s clothes out in the right order for him on the bed in the mornings.

Cal trusted her completely and took pleasure in playing tennis or going for walks along a nearby river with her. As the disease progressed, when he had bad moments, it became her turn to say to him, “Just know whatever happens, I’m on your side.”

Q: What do you think the book says about Alzheimer's and the impact on the patient as well as the family members?

A: Alzheimer’s is not an easy disease. But, as my mother’s book shows, there are also many ways to lessen its impact and keep love alive throughout it. 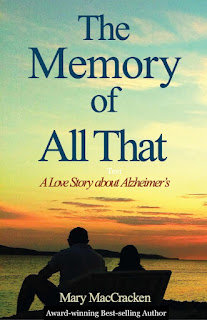 Cal’s losses - forgetting so many words, having to give up driving - were hard on him. But he still enjoyed time with my mother, like bringing the newspaper and coffee to her in bed in the mornings, dozing while she read beside him.

Also, several years into the disease he eagerly volunteered for a research study testing a new drug that might slow Alzheimer’s, proud he could contribute in this way. His last year was clearly very frustrating for him. But he always felt safe and loved.

As for family members, my mother felt the main impact of the disease. It shifted the focus of her life to what she and Cal might do together, which changed over time as the disease progressed. She was saddened by losing more and more of Cal and tried to hold on to as much of him as she could.

In the last stretch, she grew exhausted and badly needed more time alone. She finally had to accept letting Cal go to a memory care unit. But she visited him each morning and afternoon and they still treasured their times together.

So, the main impact, both for my mother and for Cal, was that all through Alzheimer’s they each did their very best at defying its efforts to destroy them. They triumphed over the disease, finding ways to share loving moments until the end.

Q: What do you think your mother hoped people would take away from the book?

A: I think my mother’s central hope was to show others how to cope successfully with Alzheimer’s and to share the small solutions and large decisions that made life easier for her and Cal and helped them sustain a loving relationship despite it.

My mother knew almost nothing about the disease at the start. She wanted to help others understand what would happen at different stages, and how she and Cal got through each, and in doing so show them Alzheimer’s is not terrifying, but manageable.

Also, and this was very important to her, much as when she wrote about autistic children, she hoped to lessen the stigma and shame associated with the disease and have those with dementia accepted as people of value and members of their communities.

I think she also hoped to provide a sense of companionship and encouragement to others facing Alzheimer’s, to let them know that she got through this and survived, and they could also.

A: Two important lessons for caregivers stand out in the book: Look for ways to handle the disease. But do not try to do it all on your own.

In terms of handling Alzheimer’s oneself, learning more about the disease, from books, the web, doctors, and others with experience, is a good first step. Being resourceful, finding ways to handle the problems, big and small, that arise is the ongoing challenge. Some major life changes may be necessary.

But, perhaps even more crucially, look for people and situations that can help you — good doctors, social workers, other health-care workers, an Alzheimer’s support group. A daycare program, a companion, and, near the end, maybe a memory care unit for your loved one are also useful.

Don’t get too isolated. Try to plan ahead, to have the structures you may need in place before you get too exhausted to set them up. Even with help from family members, realize that you cannot do this alone. But, as my mother’s book shows, you can get through it, and even enjoy sweet times despite the disease. https://marymaccracken.com/