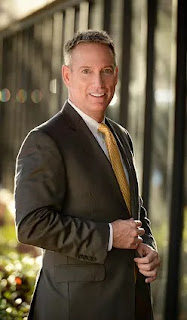 Larry Loftis is the author of the new book The Princess Spy: The True Story of World War II Spy Aline Griffith, Countess of Romanones. He also has written the books Code Name: Lise and Into the Lion's Mouth.

Q: How did you first learn about Aline Griffith, and what intrigued you about her story?

A: A friend mentioned her to me. What intrigued me was what he said: “I don’t know if any of this is true, but if half of it is, you have quite a story.”

Q: How would you compare her to the subject of your previous book, Code Name: Lise?

A: Odette (Lise) Sansom and Aline Griffith were complete opposites; Odette was quiet but aggressive and fiercely independent, while Aline was outgoing (life of the cocktail party) and charming. They were the same in that they were very patriotic and fearless. 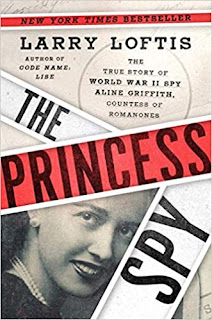 Q: What role did Aline Griffith’s own books play in your research?

A: That’s where question #1 comes into play. Aline wrote three books about her spy career, which she passed off as “memoirs,” but they were historical fiction. She was an OSS spy in Madrid, of course, with an important job, but every day was not an Alfred Hitchcock movie, as she tells.

By way of example, she writes of nine murders/killings in these books, but eight of them she made up. The true one, which I confirmed (via his unpublished memoir) with the man who removed the body, was quite true.

In sections of books where I believed the incidents were true (e.g., dinners with her spy partner, Edmundo Lassalle, and conversations with various people), I quoted portions of the dialogue.

But Aline also wrote three nonfiction works: two books and one article for the National Archives. Aside from a few places where Aline erred on dates, these were quite accurate, and I used incidents and dialogue from those as well. But as with all of my books, the National Archives provided the best and most reliable information.

A: With all three of my spies (Dusko Popov, Odette Sansom, Aline Griffith), the story is about patriotism and self-sacrifice. Popov and Sansom were lucky to have survived the war, and Aline actually continued a bit of espionage after the war (doing some “odd jobs” for the CIA). 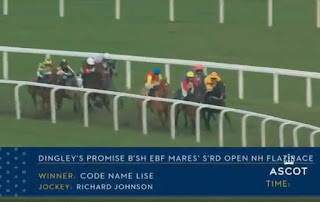 A: Another nonfiction WWII espionage thriller, of course! This one takes place in the Netherlands, however, and focuses on a woman in the Dutch Resistance.

A: Well, to return back to my prior book (Code Name: Lise) for a moment, a racehorse owner in England named a spectacular thoroughbred after Code Name: Lise and the horse just ran at Ascot last month … and won [see photo above]! This has to be a first.