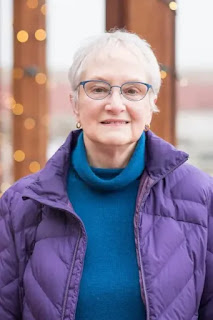 Barbara Clarke is the author of the new memoir The Red Kitchen. She also has written the book Getting to Home. She lives in Bellingham, Washington.

Q: You note that you started writing this memoir in 1961. What was your writing process like over the years?

A: I wrote the title story as a sophomore in college in 1961 for a composition class. The faculty member, Mrs. Putney, urged me to keep going as well as pursue a writing career. Due to pressure of the times back then, I got married, dropped out of college to put my husband through to his Ph.D., and had several children. It would take years before I picked up that story and started writing again.

I returned to college and later finished grad school at age 42 with a degree in health services administration—a long way from that first story I wrote. I had a career in the insurance industry, became disheartened by the industry, dropped out, and moved to a farm in Missouri to start my life over—this time as a writer.

After several years I moved to New York, interned at Wigwag Magazine, met Grace Paley at a writers conference, and while I still had to earn a living writing, I never forgot the family stories I’d restarted at the farm.

In the early 1990s, divorced, my two daughters grown, I took a workshop at Book Passage in the Bay Area where I was living and met the instructor Molly Giles. She encouraged me to apply to The Writers Community in Squaw Valley, California, that summer and I followed her there.

I showed her several stories about my family, including the Red Kitchen. “Keep going.” she said. I did, but it would take another 20 years before I was ready to write The Red Kitchen.

Given the story arc, I first wrote it as a novel. Lucy Ellmann, author of Ducks Newburyport looked at my first 5,000 words and said, “I wonder if this is a memoir.” I owe these women a huge debt of gratitude.

In 2016, I began a nine-month memoir writing program (The Narrative Project) with Cami Ostman, an author, therapist, and instructor. In that course I created enough to have the manuscript developmentally edited and after more than a few revisions and beta readers, submitted the memoir to She Writes Press for publication.

A: Telling my story and hoping that it would resonate with readers was challenging. Not until recently, months post-book-production, did I feel the impact of both the process and of potential readers.

I had to find answers for: Why I wrote the book? What right did I have to turn what many people might consider a private matter into a public read? How much reliving of my experiences—with my father and reconciling with my mother—could I process again? Did my story serve a worthy purpose for readers?

I had the benefit of good friends, writing partners, and therapy to see me through the harder to revisit parts of the memoir.

To be honest, writing the book provided a total mix of feelings—bouts of self-doubt, bouts of joy when my critique partners said Yes, a bit of dread about being so open about my life and exposing my family to readers, and the whole business of publishing and publicity full of dread and hope, sometimes at the same moment. 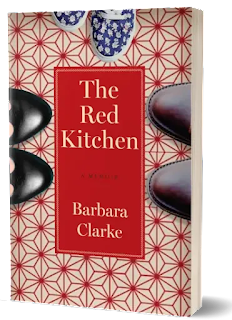 I am still somewhat in shock that the book is real and a copy sitting here on my desk. From the afternoon with Mrs. Putney to today has been quite a trek.

Q: You start by describing a memory of your mother painting your family's kitchen red. Why did you start there, and why did you choose The Red Kitchen as the book's title?

A: Originally the “In the Red Kitchen” chapter was toward the end of the book. I didn’t want to start off with that story—showing my mother in a bad light. But after several more chapters were written, I found the arc of the story and the themes of the book.

With each revision I looked deeper into the dynamics of family as well as women in the world. “In the Red Kitchen” gives readers a good look at me, my parents’ marriage, the confused feelings I had as a child, and my role in the family as observer.

I also wanted to start the story where I had the strongest memory. This might sound odd but because the Red Kitchen story had travelled through the years with me and wouldn’t let me go, I wanted to honor it.

The title originally was The Opposite of Hate based on a quote I read of how love isn’t necessarily the opposite of hate. Sometimes understanding is the best you can hope for. But Brooke Warner at She Writes (and I agreed) found too many recent titles including those words.

When I looked back through the manuscript, I saw that many of the good times with my mother and the earlier complicated and chaotic ones took place in her kitchen.

Today the title means even more to me personally because that was my mother’s only room she could call her own—her territory where after many years she invited me in and where we often reconciled the past and the present with love and humor.

Q: How would you describe the relationship between you and your late mother?

A: We had an intimate relationship almost from the beginning—I was her little confidant where she inappropriately shared her miseries with my father and her life. I was the family’s secret keeper and while my mother’s were far less deadly than my father’s, I lost my childhood far too early being both a counselor and victim.

My mother and I were like that old nursery rhyme: when we were good we were very, very good and when we were bad it was horrid through my early teen years.

In my late adolescence, I understood two things: that it wasn’t my job to fix my family and that my father wasn’t the saint he portrayed himself to be. I was even more sympathetic to my mother’s plight when the women’s movement opened my eyes even wider.

In the summer of 1981, I worked in a remote village in Kenya as part of my graduate degree and basically grew up. Without the labels of mother, daughter, and wife, I was for the first time in my life free to discover who I was.

I came back with new self-confidence and accepted not only how flawed I was but also the missteps of my mother. With two grown daughters and as a flawed person and parent myself, I could hardly hold my mother up to the light of perfection. What I gave to my mother I hoped I would, in my lifetime, receive from my own girls.

After my father passed away, my mother came of age as well. What I needed throughout my life and treasure now was having a funny, smart, sometimes self-involved, smart-ass, loving mother.

I suspect that she would say she got from me what she wanted. I became a loving daughter and was always happy to talk about two of her favorite topics: sex, especially for older women who’d endured unsatisfactory marital relations, and the women’s movement. We could cover both subjects walking on the beach or over a glass of wine. “Inquiring minds want to know” she would say and launch one of our chats.

I’m proud to say I helped her become the woman she wanted to be—well loved by friends and family, and free to say what she thought out of the shadow of her marriage. We became both a reconciled mother and daughter and good friends.

A: I am rushing to finish a memoir with the working title of Pre-existing Conditions: One Women, Two Lives. As I mentioned earlier, I spent more than 10 years working in what I now think of as the medical-industrial complex or what we call our healthcare system.

In 1989, about the time I was burning out at as a VP of Marketing, I met a man through a personal ad (this was the old days) and ultimately quit my job and moved to farm in Missouri with him.

I went there as a corporate refugee and left after several years as a writer. I worked for the local paper and wrote a journal (another old days artifact—I mailed it out). Friends and colleagues wanted to know what it was like moving to a farm in flyover country.

I grew up in St. Louis and looked down on rural Missouri until I lived there. I still miss the farm, the people, and resent the condescending attitudes both coasts have about the Midwest.

The memoir begins at the farm and weaves in my time working in managed care. After my time at the magazine, I left New York, moved to Vermont, and soon ran out of money. I was offered a job in Miami by my old managed care boss and think of that time as going down a rabbit hole.

I write about the 18 months I worked there in detail and while I thought I was done with healthcare, it renewed my interest. In 1997 I traveled to Cuba to see their system and now with Covid-19 the need for a universal system seems even more pressing.

Cuba reminded me of my time in Kenya and in Missouri where community was the engine that life ran on and made living in all three places feel like home to me.

A: I believe that our stories matter and provide readers with a way into their own lives. I believe that we can learn from each other. And closest to my heart is it’s never too late to make amends, reconcile, start again, and breathe life into an old dream and help it come into the world.