Nicki Chen is the author of the new novel When in Vanuatu. She also has written the novel Tiger Tail Soup. She lives in Edmonds, Washington.

Q: What inspired you to write When in Vanuatu, and to create your character Diana?

A: Vanuatu was my original inspiration. It’s such a beautiful, fascinating country that it cries out to be the setting for a novel.

Port Vila, the capital, has a large population of expatriates, so it seemed appropriate to tell the story from an outsider’s point of view. I’d written short stories before about people living abroad, but never a novel. And having been an expat for 20 years, I had a lot to say about that experience.

I chose Diana because I wanted a woman who relocated to Vanuatu for her own reason. Most of the women I knew found themselves in Vanuatu as a result of their husbands’ jobs.

There were occasional unusual stories, though. For example, the woman from Australia whose husband had heart trouble for which his doctor advised the move; the couple who sailed from Alaska, tied up on the city dock, and stayed; the couple from Italy who were heading to Australia but left the ship in Vanuatu instead and stayed.

I chose Diana because her reason for wanting to be in Vanuatu corresponded with my feelings about the country’s quiet beauty. 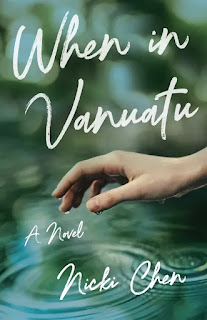 A: My first novel, Tiger Tail Soup, required extensive research. It took place during a war I’d never experienced in China, a country I’d never lived in. In comparison, I needed only minimal research for When in Vanuatu.

Nevertheless, my research did turn up a few surprises. I hadn’t realized that so many coups were attempted after former Philippine president Marcos was driven from power.

And, even after experiencing the December coup (which I included in my novel), I was surprised at how bad it actually was. Once the attack was over and we’d survived, it was easy to forget about it.

Another surprise: When I was looking for topics of conversation and gossip at a farewell party for Diana and Jay, I was surprised by how many problems and emergencies happened in the Philippines in or around the date I’d chosen for the party.

Other revelations from my research were related to infertility and associated problems. Most surprising were the open and heartfelt stories women posted online. In my experience, women often seem hesitant to talk about these experiences. So, the posts I read were more candid and open than I’d expected.

A: I absolutely did not know how the novel would end before I started writing it. In fact, I didn’t make a couple of crucial decisions about Diana’s fertility issue until I neared the time when one thing or the other would have to happen.

Along the way, I made many changes, some small, others large. The biggest change was my late decision to add a Manila section. Before that, I thought the novel would start and end in Vanuatu.

Q: What do you hope readers will take away from the novel?

I hope readers of When in Vanuatu will expand their empathy and understanding of people, especially women searching for their path in life and facing roadblocks along the way, in Diana’s case, infertility.

I hope readers will be entertained by the lives and experiences of an international group of expats in the late 20th century who, successfully and not so successfully, made their temporary homes in foreign lands. And I hope they will enjoy some armchair travel to Asia and the South Pacific.

A: I’m working on a collection of short stories set in the South Pacific.

A: I wrote When in Vanuatu from my home in Edmonds, Washington, sometimes (before COVID) from a nearby tea shop or from Starbucks. I composed by hand while sitting on a high stool at my kitchen island, afterward transferring the day’s writing to my computer. Although I wrote far from the Philippines and Vanuatu, I consulted my old journals for details.

A big thank you to Deborah for conducting this interview. And I’d love to hear from her readers. Thank you all.

Behind the Story – Across the ocean and back with Nicki Chen (nickichenwrites.com)

Blog – Behind the Story (nickichenwrites.com)