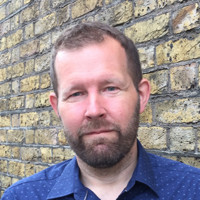 Giles Sparrow is the author of the new book A History of the Universe in 21 Stars (and 3 Imposters). His many other books include The Traveller's Guide to the Solar System. He is based in the UK.

Q: How did you choose the stars to include in your book?

A: I’d had the idea of doing a book that told the story of the Universe through a couple of small handfuls of stars for a long time - the real question was just how few I could get it down to and still tell all the stories I wanted to tell.

Once I had a list of the different types of stars I needed to talk about, visibility was the main guiding principle: obviously if you want to tell the whole story of the Universe you’re sometimes going to have to deal with stuff that’s too faint or far away to spot with the naked eye, but I wanted as many of them as possible to be either really bright and obvious stars or at least ones that you can find your way to with a map and some fairly simple directions.

The second issue was to find stars with interesting stories: you could just write a guidebook that simply tells people what these objects are, but I think it’s much more interesting to explain how we’ve come to understand them, and the smart ideas and lateral thinking that have led to our current knowledge of the cosmos.

Q: What differentiates the stars you discuss from the imposters?

A: The three imposters are objects where I cheated a little. All of the individual stars we can see in the sky are members of our Milky Way galaxy, so to get beyond that and tell the wider story of the Universe, I needed to look at things that are fainter and farther away. 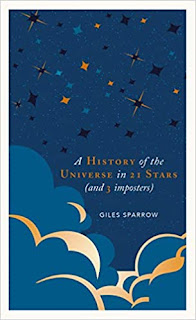 Fortunately there were these three objects that have all been mistaken for stars at one time or another – a star cluster orbiting the Milky Way, the famous Andromeda Galaxy, and a distant, violent galaxy called a quasar – which filled out the gaps perfectly and meant I didn’t have to bend my self-imposed rules too far!

Q: The book includes information on the origins of the stars' names--are there a few that you find especially fascinating?

A: Star names come from a strange mix of historical accidents and stamp collecting.

A lot of the brighter ones have names that come from Greek, Latin, or Arabic, but when astronomers started to make the first detailed star charts after the invention of the telescope and the first European trips to the southern hemisphere, they found there were a lot more stars to catalogue and came up with various ways of filling out the gaps – a mix of Greek letters, numbers and the odd new proper name.

I think my favourites, however, are much more recent – there are three fairly bright stars scattered across the sky that were used for navigation during the Apollo moon programme, and they’re nicknamed Navi, Dnoces, and Regor, all of which are hidden references to the three astronauts, Grissom, White, and Chaffee, killed in the Apollo 1 launchpad fire of 1967.

Q: What first intrigued you about astronomy?

A: I’ve been fascinated by space for as long as I can remember - I think my grandma might be to blame because she’d taken a night class and used to keep the monthly sky guide from the newspaper.

I think it’s hardwired into us to be fascinated by our place in the Universe and I find it intriguing hat it’s often one of the first areas where kids start asking those sciencey “why” questions, just as it was the first real topic that our ancient ancestors tried to get a hold on in a semi-scientific way.

For me personally, the first time I remember wondering about the night sky was sitting in the back of my parents’ car at night and wondering how the Moon “kept up” with us while everything else raced past at different speeds.

Obviously I didn’t know then that astronomers had asked the same question centuries before, and had been using the basic principle, called parallax, to work out the distance to stars since the 19th century.

A: I’m currently deep in research for what should be a really lovely project – a facsimile of a gorgeous 18th-century star atlas for which I’m providing a modern commentary and explanation – there’s a lot of Latin to decode but it’s fascinating to immerse yourself in the mindset of the time, and see how a lot of our modern theories of the Universe began to evolve.

I’m also planning out a follow-up to 21 Stars that will focus more on planets and moons in our solar system and beyond.

A: I guess for me, one of the most exciting things about astronomy is how we glean so much from the light of distant stars – partly through technology, but also simply through asking clever questions.

Outside of the solar system every other star in the Universe is so far away that we can’t ever hope to study it up close – instead we just have to work with the light we’re given, which spends decades, thousands, even millions of years crossing vast expanses of space only to end up exciting the nerves on our retina or pixels in a camera.

I finished this book in the midst of last year’s first coronavirus lockdown and remember thinking then how amazing it is that people who can’t be together in person can still stand outside and come together by sharing the same starlight.