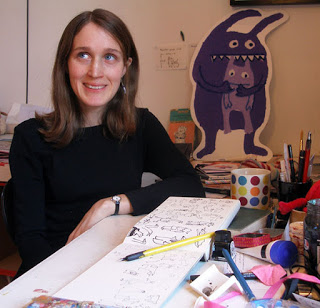 Daisy Hirst is the author and illustrator of the new children's picture book I Like Trains. Her other picture books include Hamish Takes the Train. She lives in Cambridge, UK.

Q: This is not your first book about trains--what inspired you to write this one?

A: I do think trains are great, but I didn’t mean to write two books about them!

When I had the idea for I Like Trains I felt sad because I liked it but I didn’t think I could publish another train book so soon after Hamish Takes the Train. But my publisher and I decided that it didn’t matter because it’s a completely different type of book and aimed at a younger audience.

I Like Trains grew out of a series of sketchbook doodles in which a little bear talked about all the ways he or she liked to play with trains, but I’m sure the character was inspired by some real, train-loving children I’ve known. I wanted to capture that particular joy trains seem to inspire. 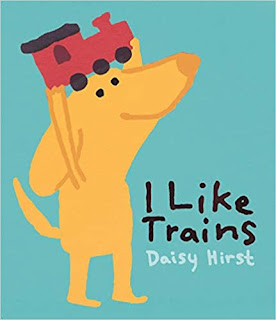 Q: Why did you decide on a dog as the main character?

A: In my original doodles, the character was a bear, but that did seem unnecessarily similar to Hamish (also a bear). I tried redrawing the story with lots of different animals, from mice to rabbits, but there was just something about this small yellow dog – perhaps his or her expressive ears and tail – that stood out for me.

Q: The Publishers Weekly review of the book says, "With sturdy artwork and reportorial language, Hirst...celebrates a young train enthusiast in a story that foregrounds experiences over engineering." What do you think of that description?

A: I thought it was a lovely review, and really got what we were trying to do with the book. We wanted to really focus in on all the ways a small child can enjoy their love of trains, through a simple story that’s hopefully joyful and affirming.

I like “sturdy artwork,” too. I have different aims when illustrating different books but with this one it felt right to be big and bold, with strong colours and lots of white space.

A: I don’t exactly set out to convey a message, but I did want to celebrate small dog’s enthusiasm – it happens to be for trains but whatever it is a person loves (as a child I loved rabbits, drawing, stories, swings…) that enthusiasm seems a wonderful thing to me.

It was also nice to make a book in which a grandparent is really important.

A: I’m screen-printing the final illustrations for my fourth book about Natalie and Alphonse, two little monster siblings who first appeared in Alphonse, That Is Not OK to Do!. It’s great to be drawing these characters again – I’ve got so attached to them over the years.

I’m also working on some board books, which will hopefully complement my first two, Monster Clothes and Monster Food (published by Candlewick later this year).

A: I Like Trains is aimed at younger children than my other picture books and was an interesting challenge to write and edit because I wanted to keep the story and pictures as simple as possible but still include enough story to make it satisfying.

What else? Well, my own favourite thing about trains is staring out of the window, so I was glad we found space to include some of the exciting things small dog sees from the train.

Something I’ve really enjoyed since the book was published is that it seems to inspire children to immediately start talking about their own experiences with trains.

I wonder if this is because the book is written in the first person, so small dog talks to us directly: perhaps this encourages or empowers children to tell their stories too?