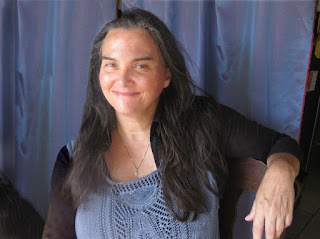 Philippa Dowding is the author of Firefly, a new middle grade novel for kids. Her many other books include the middle grade novel Oculum, and her work has appeared in a variety of publications, including The Adirondack Review and The Literary Review of Canada. She lives in Toronto.

Q: What inspired you to write Firefly, and how did you create your protagonist?

A: Firefly lives in the park across from her mother’s house all summer. Then one night a social worker finds her, and sends her to live with her Aunt Gayle in The Corseted Lady costume shop.

The costume-shop setting of Firefly is inspired by a real costume company run by my extended family, which provides costume and wardrobe for film, television and theatre productions.

It’s an amazing, magical place with 7 million pieces (if you count all the buttons, costume jewellery, boots and so on as well as the costumes), and I’ve always wanted to write a story set there.

So I’ve had the setting inspiration for the book for a long time, but the plot idea came to me in a sudden “who knows where ideas really come from” moment.

A few years ago, I had a vivid image pop into my head: two kids in Halloween costumes stand on a huge bridge, hold hands and look down onto the traffic below. The image was sweet and sad at the same time.

It was so vivid that I started to explore it. Who were the two kids? Why were they on the bridge in Halloween costumes?

I wrote the scene, which is now a pivotal scene in the book, then I realized it was part of a much bigger story about costume and disguise, family and self-discovery.

Once I realized that, the character of Firefly came to me almost fully formed: a smart, indomitable kid, struggling with PTSD due to a difficult home life, trying to take care of herself in a big city.

My real-life setting of a movie and television costume warehouse had found a protagonist, and a story: in the magical, you-can-become-anything setting of The Corseted Lady, which costume is the real Firefly? 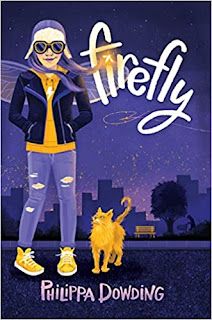 Q: What do you think the novel says about definitions of family?

A: One thing I’ve learned from raising my family in a busy city is that our definition of family is constantly changing, and that we help, support and love each other in ways that make us family, whether we’re related by blood or not.

Firefly has a friend in the park who looks out for her, a homeless man named Moss Cart, who despite his own challenges helps her as best he can. She helps him, too.

There’s also a group of therapists at Jennie’s, a women’s drop-in centre, who teach Firefly coping techniques for PTSD (the therapists don’t know she is only 13).

And there’s Aunt Gayle who barely knows her niece, but agrees to shelter and care for Firefly as soon as the social worker contacts her. Aunt Gayle’s staff at The Corseted Lady all care for Firefly, too. As they spend time together in the days before Halloween (a busy time in a costume shop), they give Firefly support and validation in the most unusual way (and a plot twist that I can’t give away!).

When she starts grade nine six weeks later than everyone else, Firefly also discovers a family of school friends she never expected.

The only traditional family member in the story is her mother (who she calls Joanne-the-mother), who has failed Firefly. At the end of the book, they are not reconciled although there are supports in place for Firefly if she ever wants to connect with her mother.

What is a family? Ultimately in this book, it’s up to Firefly.

A: There is a scene near the end of the book, where a boy without a shirt, socks, or shoes runs into The Corseted Lady, and Aunt Gayle hands him a shirt. That scene was crystal clear in my head before I started writing.

The bridge scene I’ve mentioned, which is also near the end of the book, was very clear. There is another scene on Halloween day (that plot twist I can’t give away again!) that I saw with a gazer-beam intensity, too.

The entire book was pretty clear to me right from the moment I started writing, which is quite rare for me. They’re not all like that! But I think writing about a real costume shop that I know so well, with such a vivid main character in Firefly, kept the story clear in my head from start to finish.

A: I hope that young readers learn some terms they’ve never heard before, or they may have heard but not understood well, like post-traumatic stress disorder (PTSD), or dissociation.

I hope Firefly’s story builds empathy in readers for classmates, neighbors, friends, or for anyone who lives in a family experiencing a crisis of mental health, addiction, or homelessness.

I also hope that any child in a similar situation to Firefly’s will ask for help. I want that child to hear: find your crew, let them love you and help you. You're not alone.

A: I’ve just finished a sequel to Oculum, my award-nominated dystopia for middle-grade readers (with Shakespeare and robots!), which is with my publisher.

I’m also polishing a fun, high-fantasy, middle-grade story about kids who hunt stories, The Story Hunters of Fen. And I’ve just started a new horror series for middle-grade readers, one of my favourite genres to write. The first story is about a girl hiking in the mountains, pursued by an elusive bug.

The pandemic has made me spend a lot of time alone in my office, getting better acquainted with the strangers in my head!

A: Firefly has PTSD because of a tough childhood with her mother, but it’s not what defines her. She’s smart, kind, indomitable, and she’s also quite funny.

In fact, I think this is one of the funniest books I’ve ever written, a balancing act of humour and pain. In one of my favourite chapters, for instance, a main character runs down a busy city street in a huge, leafy carrot costume. I’ll just leave that there!

By the end of the book we know that Firefly has a long journey ahead of her, but she’s got support and her strong, loving Aunt Gayle at her side, no matter what. And of course, Firefly lives in a costume shop so she has all the opportunities she could ever want for fun and self-discovery.

Keep reading, everyone. Here’s my motto these days: we can’t hold each other right now, but until we can, it may help to hold a book.

Thank you for hosting me and Firefly, Deborah!