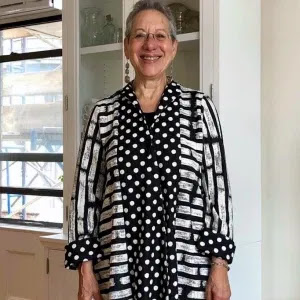 Deborah K. Shepherd is the author of the new novel So Happy Together. She was a social worker for many years, and she lives in Maine.

Q: You note that you wrote an initial draft of your novel 30 years ago. How much did you change to create this new version?

A: It’s now been 34 years since I first sat down in front of the Brothers Word Processor on my kitchen table and started to write, after my kids and my soon-to-be-ex-husband had gone to sleep.

As my marriage was unravelling, I had fantasized leaving to find my college boyfriend: What if I had made that other choice? That fantasy never played out in real life, but it did for my book’s protagonist.

When I believed I had a finished book (one draft), I sent it off to a New York publisher, who rejected it (in hindsight, a very wise move on his part). With one rejection under my belt, I threw the manuscript into a box in a closet, convinced that I had no writing talent whatsoever.

The box followed me from New York’s Hudson Valley (where I got divorced) to New Jersey (where I moved in with my new love) to Maine (where we got married and bought a house).

A few years after I retired, I started writing a novel. My husband reminded me about the book-in-a-box and urged me to pull it out to see if I could incorporate any of the old material into the new manuscript.

When I read it, I realized that it wasn’t so bad after all. It wasn’t so good, either, but it had potential. I also believed that fixing what was wrong with this manuscript would be less labor-intensive than starting a new one (little did I know: three years) so I retyped it on a computer, making edits as I went along.

I then had the good sense to enroll in a Maine Writers and Publishers Alliance workshop on “Point of View in Fiction” taught by writer and developmental editor Tanya Whiton. I wasn’t even sure what “point of view in fiction” meant, but it sounded like something my novel needed.

I had submitted a writing sample and Tanya commented that the husband was one-dimensional and not believable, and that I needed to show his emotions in the scene with his wife.

Then, when I should have been paying attention to “point of view,” I proceeded to rewrite the scene and showed it to Tanya after class. She commented: “Yes, that’s more like it,” and I knew she could help me uncover what was missing in the narrative.

Tanya worked with me as I gradually unearthed the emotional core of the story. And worked with me. And asked questions I often didn’t have the answers to, and I put in almost as many hours into these rewrites as I had writing the original manuscript (at least it felt like it). 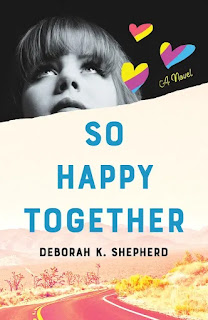 Finally—fourth draft—it was finished: “Ta day! It’s done,” I crowed and handed it to Tanya.

She read the first chapter: “Nope, not a novel yet. Where’s your inciting incident?”

She didn’t laugh, didn’t throw the manuscript down, appalled that I had gotten this far without a clue, but patiently explained.

But by then, I had started to whine. I so wanted to be done: “Well, I just read a book by a pretty well-known author and there’s no inciting incident. It’s just about this woman going through menopause, so she goes on a road trip.”

“What, and you don’t think menopause is an inciting incident?”

And then I went home and wrote a damn good inciting incident and added a kick-ass prologue and gave it back to her.

A: The book’s title, So Happy Together, is from The Turtles’ 1967 song, “Happy Together.”  It’s a song of yearning and imagining, with the singer asking the girl he’s in love with to think about how wonderful it would be if only they could be together.

Much of the flashback portion of the book takes place in the same year the song came out, and resonates with the story of the protagonist, Caro, who imagines how happy she could be if the relationship with Peter--with whom she is truly, madly, deeply in love--would move to the next level.

The lyrics of the song also reflect ironically on the relationship between Caro and her husband Jack who, in the 1980s, are not so happy together and Caro imagines, once again, that she could be happy with Peter. The arc of the book follows Caro as she sets off to make her imagined life a reality.

Q: How would you describe the relationship between Caro and Peter?

A: At 20, Caro falls hard for Peter, who gives her the attention she craves. Peter sees Caro as the anchor he needs to keep himself from despair.

So, in some ways, I guess you could call them co-dependent, but this does not begin to touch the depth of what they mean to each other. They connect immediately upon meeting and soon become inseparable, in that know-what-the-other-is thinking, finish-each-other’s sentences kind of way.

Caro believes that Peter is her one-and-only, her soulmate, if only she can figure out how to make him believe that, too. For Peter, Caro represents normalcy and everything he thinks he “should” be. He connects with her on a deep level but can only go so far.

A: I hope readers can identify with Caro: How many of us, when the going gets rough in our relationships, fantasize about the “what if?” How many of us wonder what it might be like to start over, to get a second chance? How many of us, when we get to mid-life and our creative impulses have been subsumed to meet the needs of spouse and kids, wonder if that’s all there is?

I’d like So Happy Together to create an experience that engages the reader’s emotions and imagination. We love stories because we can become someone else for a while. These days, especially, we could all use a little escape from reality, right?

I’ve also had readers tell me it brought them right back to their youth in the ‘60s. For younger readers, there still remains a fascination with the era.

A: Right now, I’m about three-quarters of the way through a first draft of a memoir about my relationship and subsequent marriage to a much older man.

And on this cold and icy day in mid-coast Maine, I’m dreaming about planting my vegetable garden.

A: So Happy Together is my debut novel, and I’ll be 74 when it’s published by She Writes Press on April 20.

I had a very gratifying career as a social worker, directing two nonprofit organizations focusing on the prevention of sexual assault and domestic violence.

In that capacity, I had to write grants (many, many grants) and their accompanying compliance reports (many, many reports). The latter dealt with so much minutia (“Dear Federal Government: I swear the paper clips and copy paper I bought with your money were only used in the project you funded and were not used for any other purpose in the agency.”) that, when I retired, I swore I’d never write anything longer than a grocery list.

But eventually I felt compelled to write, and the result is a 100,000+ word novel: considerably longer than a grocery list. Ditto the memoir I’m now working on. And my husband has taken over the grocery lists.

At first, I though it made me rather unique that my debut novel was coming out at my advanced age, but through the workshops I’ve been taking with Maine Writers and Publishers Alliance and joining the She Writes Press community, I’ve met so many wonderful women who’ve had other careers and/or raised families and are now, at 60 or 70 or 80, finally getting around to that book they always meant to write.

It’s gratifying to be among these writing peers: Finding community is so much better than being “unique.”