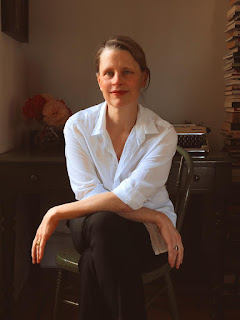 Natalie Standiford is the author of the new novel Astrid Sees All. It's her first novel for adults; she has written many books for kids and teens. She lives in New York City.

Q: What inspired you to write Astrid Sees All?

A: For me a novel is often inspired by several different ideas coming together.

A few years ago I read Rona Jaffe’s The Best of Everything, which is set in Manhattan in the 1950s. It’s about three young women who work in the typing pool of a publishing company, and it reminded me of my own first years in New York in the 1980s.

I worked in publishing and lived on the Upper West Side with a group of ambitious working-girl roommates, so at first I tried writing a sort of ‘80s version of Jaffe’s novel.

But after a year on the Upper West Side I moved to the wilder, grittier East Village, and my memories of the downtown clubs, galleries, and streetlife began to overshadow the publishing/roommates story.

Downtown Manhattan had a unique and magical energy then—I realized it would make a great setting for a novel. I loved revisiting those wild years in my memory—the clothes, the movies, the art, the music, and the eccentric characters.

But between the drugs and the crime, life downtown could also be dangerous. I thought of all the reckless, foolish things I did in my 20s, and the way I’d felt driven to look for the seamy underbelly of the city, fascinated by it.

I’d had a fairly sheltered childhood and was so curious about all the drama and vices I’d been protected from. In this novel I wanted to explore that curiosity—the decisions people sometimes make that look self-destructive from the outside, but that are actually driven by a hunger to see everything, to learn about all aspects of life.

Q: The Kirkus Review of the novel says, “Standiford’s first novel for adults harkens back to the days, or should we say nights, of Slaves of New York and Bright Lights, Big City.” What do you think of those comparisons?

A: I read both of those books when they were published in the ’80s, and loved them.

Bright Lights, Big City was the hip novel every 20-something was reading on the subway, and I turned immediately to Tama Janowitz’s stories whenever they appeared in The New Yorker. I strongly identified with her character Eleanor—her neurosis, her insecurity, her tendency to feel faint at awkward moments, and her sense of being trapped by the city’s high rents.

I’m honored to have Astrid Sees All compared to those New York classics.

A: I made several false starts trying to settle on a title. My first working title was “Avenue A,” but that seemed a little generic. Then for a while the book was called “East Village Ghost Story,” but that didn’t really fit the mood of the novel. I listed all the ‘80s song titles I could think of, hoping something good would pop up, but nothing did.

Finally I realized that the sign Phoebe posts on her fortune-telling table, “Astrid Sees All,” could be interpreted in several different ways and fit the book quite well. (Phoebe works as a fortune teller at a nightclub, using movie ticket stubs in place of tarot cards.)

I like the ambiguity of it: Does playing the role of Astrid somehow heighten Phoebe’s powers of perception? She wants to experience everything she can, she wants to “see” all aspects of life, the light and the dark—but at what point does she actually understand what she sees?

Q: As noted above, this is your first novel for adults. Was your writing process similar with this novel, and do you have a preference in terms of the age groups you write for?

A: This novel took longer to write than any of my YA novels did, partly because I needed several drafts just to figure out who my characters were and what story I wanted to tell.

I also found that I needed a more extensive backstory for Phoebe than I was used to creating for my younger characters. A child or a teen doesn’t usually have a long history to take into account, and in my YA and middle-grade novels I’m often writing about a character’s first experiences, so plotting them can be more straightforward.

But for the most part, the process was similar, and I can’t say I prefer writing for one age group over another. It depends on what kind of story you want to tell, and they all have their joys and struggles. I feel lucky that I’m able to shift from one kind of book to another.

A: I’m working on another adult novel, this one set in the 1990s, about two sisters. That’s about all I can say right now—I’m still writing the first draft.

A: If you’re interested in the songs mentioned in Astrid Sees All, I made two Spotify playlists full of great ’80s music (there were so many good songs I kept adding more). You can find them under “Astrid Sees All” and “Astrid Sees All Pt. 2,” or on Spotify online at these links: https://open.spotify.com/playlist/7yxCBjxebfOtOqe9Ni80KU

Also, Atria put together a wonderful Reading Group Guide, with suggested book club discussion topics, a long interview with me, a list of the movies mentioned in the novel, and a map of places in the book! There’s a link to it on my website: https://www.nataliestandiford.com/bookclubs_.htm