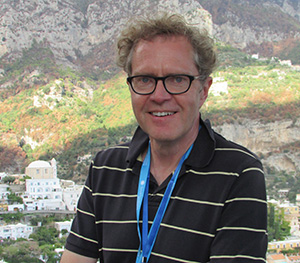 Ross King is the author of the new book The Bookseller of Florence: The Story of the Manuscripts That Illuminated the Renaissance. His many other books include Brunelleschi's Dome. He lives in Woodstock, UK.

Q: How did you first learn about Vespasiano da Bisticci, and at what point did you decide to write this book?

A: I occasionally came across Vespasiano’s name when I read books about the Medici. He would be mentioned as “Cosimo de’ Medici’s favorite bookseller”—but usually without any further explanation or information.

For a long time I’d wanted to do a book on manuscripts in Florence, and so Vespasiano, as the biggest manuscript dealer in Europe, was an obvious choice as a place to start.

But the more I read about him, the more I realized that he was the perfect person to help me give a panorama of Florence in the 1400s. He knew absolutely everyone, from popes to kings and princes, to three generations of the Medici.

Luckily, he wrote biographies of them all, leaving a wealth of gossipy detail. 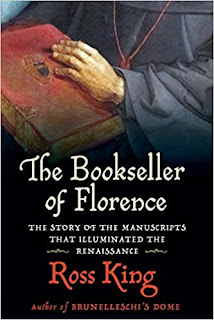 Q: What impact did the invention of the printing press have on Vespasiano's work?

A: Printed books, invented in the 1450s, were much cheaper than handwritten manuscripts—roughly 20 percent cheaper.

But they were also, Vespasiano believed, uglier and full of mistakes, unlike his beautifully produced manuscripts from which he carefully eradicated errors.

He refused to have anything to do with printed books, but obviously they became the new information technology—and so he was eventually forced to close his bookstore! The only good thing is that he then had free time to write his memoirs of his famous clients.

Q: How well known was Vespasiano in his time, and what do you see as his legacy today?

A: Vespasiano was extremely well known in his own lifetime, both in Italy and abroad. He was very well connected, and foreign dignitaries coming to Florence sometimes visited him first because he knew everyone and could make the introductions.

He was known, quite justifiably, as the “king of the world’s booksellers.” Anyone who wanted to have a beautiful copy of a manuscript, written on parchment by the finest scribes and decorated by gorgeous illumination, knew who to turn to.

A: I hope readers will enjoy immersing themselves in a fascinating moment in world history, and learning about things such as manuscript production and the rise of the printing press. And ultimately, I suppose, I’d like people to consider that books and manuscripts were as important to the Italian Renaissance as paintings and sculptures.

A: I haven’t started a new book yet, but I’m filming a series of short talks for my YouTube channel on “Renaissance Discoveries,” which covers many of the intellectual and technological advances of the 1400s. Unlike Vespasiano, I’m trying to embrace new technologies!

A: I love to quote one of Vespasiano’s lines to everyone: “All evil is born from ignorance. Yet writers have illuminated the world, chasing away the darkness.” More than 500 years later, it’s still important for us to look for wisdom and guidance in books.