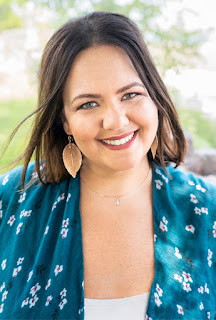 Alison Hammer is the author of the new novel Little Pieces of Me. She also has written the novel You and Me and Us. She is a VP creative director at the marketing agency FCB Chicago, and she lives in Chicago.

Q: How did you come up with the idea for Little Pieces of Me?

A: Little Pieces of Me was inspired by something that happened to a friend of mine. One night in 2017, I met up with a bunch of friends at a neighborhood bar. When I saw one of my girlfriends, I said “hello,” and she said—“You’ll never believe what I just found out through Ancestry.com.”

After a few wrong guesses, I gave up and she told me that she’d gotten an email about a parent-child match with a man who wasn’t her father. At first, she thought it was a mistake, but after a little research, she realized this man went to college the same place and same time as her parents.

I was intrigued—and when she said this man, her DNA dad, didn’t have any other children, that’s the moment the spark of the story settled in my mind. And I do want to make it clear that Little Pieces of Me isn’t my friend’s story—her story was just the inspiration for it!

A: I’m not a big researcher—but I did have a few conversations “interviewing” my friend who had a real-life DNA surprise and two of her friends. I also read a few articles and personal essays written by people who had similar experiences.

While the DNA test is the instigation for the story, most of the book is about relationships and self-discovery—and a lot of those things that are universal, so I didn’t have to do much research there. 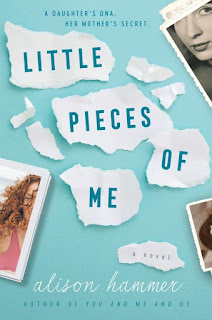 I did however, do a DNA test of my own. It only felt right. But I did rope my family into it under the guise of a holiday gift. I gave all the adults in my family Ancestry.com kits—and my dad surprised me back by giving my sister, brother-in-law, and me 23 and Me kits.

So far, there haven’t been any surprises—I’m 99.5 percent Ashkenazi Jewish, and everyone who was supposed to be on my family tree was there!

One other area I had to do a bit of research for was about 1974—who the big celebrities were, what was going on in the news of the world, fashion trends and popular shades of lipstick—things like that.

One of my biggest surprises actually wasn’t caught until the last minute, but I found out that back then, microwaves didn’t have clocks. Who knew?!?

Q: What do you think the book says about the definitions of family?

A: What a good question! I think the book says a lot about family, and how the definition goes beyond biology. Love is what makes a family—whether that’s the family you grew up with, or the close friends that surround you.

One other aspect of family that the book touches on is the idea that as children we don’t always realize our parents were real people who had actual lives before we were born.

They might not have been perfect, and they likely made their fair share of mistakes—but that’s just part of the journey that brought them to the moment in time where they became our parents.

A: Little Pieces of Me actually wasn’t the first title of the book. When I wrote it, I originally called it Blank Paige—just like Paige and her dad, I have a love of puns!

My editor thought it was important to have a title that was more telegraphic—and something that wouldn’t be so easily misspelled (if people thought it was Page vs Paige).

My agent, my editor, and I brainstormed and came up with a LOT of different titles. Two that rose to the top were “The Biggest Little Thing,” referencing a person’s DNA and “Pieces of Me.” That one was a little too close to another title, so we went back and forth before adding “little” so it became Little Pieces of Me.

I really love the title and love that it represents both the literal and metaphorical pieces of a person—their DNA, yes, but also the love and memories they grew up with. They’re all pieces that make us who we are.

A: I’m working on so many things—too many for someone who also has a full-time job! At the moment, I’m co-writing a romcom with my writing bestie, Bradeigh Godfrey, about two estranged half-sisters who inherit a beach house.

I am also working on my 2018 NaNoWriMo project about three girlfriends who step up to help raise the baby of their best friend who recently passed away. I promise it’s a lot more lighthearted than it sounds—there’s even a little romance!

I’m also finishing up my project from this past NaNoWriMo, a book I’m co-writing with author/singer-songwriter, Stephen Kellogg, about a past-his-prime musician out on the road with an up-and-coming young singer-songwriter.

A: Hmm, nothing I can think of. Except that I love connecting with readers online.

One of the highlights of the pandemic has been joining virtual book clubs around the country—I even remotely joined a book club in Haiti! So if any book clubs read Little Pieces of Me (or my first book, You and Me and Us), I’d love to connect!

Thank you so much for having me again!!