Leslie Cohen is the author of the new novel My Ride or Die. She also has written the novel This Love Story Will Self-Destruct. She is based in New York.

Q: What inspired you to write My Ride or Die, and to create your characters Sophie and Amanda?

A: I loved the idea of taking the usual romantic comedy and flipping the script, which in this case meant taking the friendships, which are usually ancillary to the main story, and giving them center stage.

A: It says that female friendship is powerful, absolutely essential, and also— tricky. 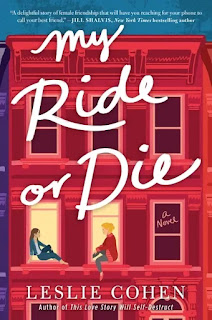 It isn’t about whether friendship is more or less important than romantic relationships, but rather about how those friendships can actually sustain the romances. It's about finding the right place for both, which can take some finagling.

My hope is that this novel is very true to the way that women interact and speak to each other.

A: I had a few ideas, in the beginning, of how I wanted it to end but I always change my mind. The story and characters change as I write. But some parts of my original idea remained. I knew the mood of the scene before I knew any of the details.

A: We wanted to quickly encapsulate the significance but also the fun of female friendship, which is actually rather difficult to do in a succinct way, and without sounding too young. Many, many titles were proffered and scratched.

When my editor at HarperCollins suggested this one, I was hesitant at first, but then I grew to like it. It’s very much a part of the vernacular right now, and it’s not tossed around lightly. It’s an important designation that is meaningful to those who use it. To me, it means that person who is there with you through thick and thin.