Menachem Kaiser is the author of the new book Plunder: A Memoir of Family Property and Nazi Treasure. It focuses on his family history, including his efforts to reclaim a building in Poland and a cousin's connections to treasure hunters in Silesia. His work has appeared in a variety of publications, including The Wall Street Journal and The Atlantic. He lives in Brooklyn.

A: When I first visited the building in 2011, I was adamant that I would not write about it. Even when I began the reclamation, I was not all that interested in writing about it. I didn’t think I could do it in a way that felt honest.

I didn’t know my grandfather. I felt it would end up defaulting into a familiar sentimental narrative. It was freeing to have the experience without writing about it.

I thought it could be interesting for a novel. When the treasure hunter thing happened, it became very compelling, and I thought there’s a book here. It was exciting but disheartening. I knew I would be pulled into a space that would be difficult.

Q: Yes, you’ve said you’ve wondered whether you should have written this story as a novel rather than nonfiction. What do you think you might have been able to say in fiction that you couldn’t say in the book you ended up writing? 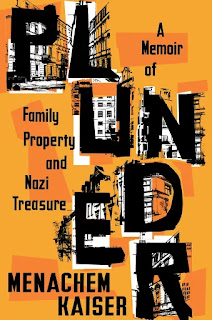 A: If it had been a novel, there would have been the freedom of imagination that allows empathy to establish and create my grandfather’s experience.

The building I was trying to reclaim occupies the emotional core of the book, and it was difficult for me, my relationship to it. If it had been a novel, [the perspective] could have been closer to that. Not necessarily my real grandfather, but a projection.

Once you step into nonfiction, there are tricky questions of authenticity and moral authority. With nonfiction, it’s true, and the stakes are very clear for the reader.

Q: In the book, you alternate between your family’s story and the group of treasure hunters exploring Silesia. How did you come up with the book’s structure?

A: I had two narratives that didn’t seem all that connected. But it was very connected on a subterranean level that defined my experience in Poland and my memory adventure.

Abraham Kajzer [famous among treasure hunters] became a stand-in for my grandfather [his cousin], and I was able to access a rich legacy and see how inaccessible my grandfather was.

There were two separate narratives, but they were so intertwined—searching and finding—they became thematically braided.

When I initially pitched the book to my agent, I saw it as Book 1 and Book 2. This was in 2017 and a lot of the story hadn’t happened yet. My agent said, this story is you and your journey. Then I saw it as very intertwined.

Q: In the book, you write that “our stories are not extensions of our grandparents’ stories, are not sequels. We do not continue their stories; we act upon them. We consecrate, and we plunder.” Can you say more about the writing of family memoirs, and about the title of the book?

A: There’s a subgenre of Holocaust [survivors’ descendants] returning to the land where they are from, but they are foreign. They do not speak the language. A lot of us have inherited stories of immense trauma. Even if you have the details, you’re not able to access the feelings. I was in the position of not knowing anything. The narrative was never really articulated.

This was my pushback against the default mode. We often see ourselves as the protagonists of our grandparents’ stories. I’ve seen that a lot of people have done it, and it’s meaningful and important, but this is me saying how do we frame these stories and highlight the unbridgeable void?

Initially the title was not Plunder, it was Kajzer. I liked the title. It spoke to both narratives. The publisher said they loved the project but the title was not going to work. There were practical reasons—no one will know how to pronounce it, and it’s difficult to translate.

It wasn’t that easy coming up with a title. It took a long time. I was wary initially of Plunder but it has acquired a lot of meaning. It speaks to the layers, not just of what the Nazi hunters were doing but what I was doing.

A: No one’s read it except my parents. Everyone else is excited. My parents have been very supportive. Within my family, it’s a book about my family. In a more personal sense, there are bizarre family documents. It opens [information] that no one in the family knew about. They’re excited because it will be new to them.

A: I have a finished novel about Yiddish poets and hopefully I’ll turn to that. I would love to see it out in the world.