Chana Stiefel is the author of the new children's picture book Let Liberty Rise!: How America's Schoolchildren Helped Save the Statue of Liberty. Her many other books include My Name is Wakawakaloch!. She lives in New Jersey.

Q: What inspired you to write this picture book about the Statue of Liberty?

A: I first heard this story from my friend Jackie Glasthal in 2014. Jackie had written a middle grade novel called Liberty on 23rd Street. The setting was Lower Manhattan when the Statue of Liberty was being built in 1885.

When Jackie told me that Americans didn’t want to pay for the pedestal and that children contributed their pennies to build one of America’s most cherished icons, I was floored. How could I live 30 minutes away from the Statue of Liberty and not know her history?

I knew right then that this had to become a picture book. Seven years later...

Q: The Kirkus Review of the book says, "Readers will relish knowing that kids played a pivotal role in the campaign; many actual quotes from children are included." What do you hope kids take away from the book? 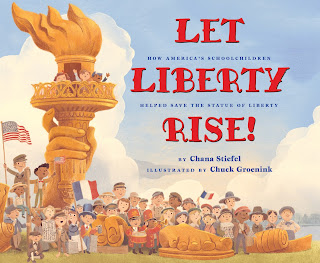 A: The overarching message is that sometimes challenges may feel insurmountable, but Let Liberty Rise shows that every contribution matters “no matter how small the sum—or how small the person.”

One little girl sent in 60 cents to the pedestal fund. “I wish I could make it $60,000,” she wrote, “but drops make an ocean.” Children should know that every small action matters. That THEY matter.

I also hope that as children turn the pages, they see that America is at its best when we join together for a cause. More than 120,000 people contributed to raise $100,000 for the pedestal fund.

Donors included schoolchildren, as well as farmers, factory workers, policemen, housewives, office clerks, and others. When we work together we can accomplish incredible things.

Q :What do you think Chuck Groenink's illustrations add to the book?

A: Chuck did a fabulous job making this story come to life. He captured the time period perfectly in the clothing, architecture, and the historic details of building the Statue of Liberty. The expressions on people’s faces are priceless. There’s also a beautiful warm glow that spreads throughout the book and I think it originates in the copper hues of the statue.

By the way, Chuck hid two famous paintings from the late 1800s in the illustrations. Parents and children might enjoy searching for them.

A: I spent a lot of time scrolling through microfilm of the New York World newspaper from 1885 at the New York Public Library. I also took a ferry to the Bob Hope Memorial Library on Ellis Island, which is dedicated to the history of the statue, and I read a ton of books about the statue.

There were so many surprises! I knew that the Statue of Liberty was a gift from France, but I had no idea that many Americans didn’t want her and the richest New Yorkers didn’t want to pay for the pedestal. I also didn’t know that she was fully built in France, then dismantled, and shipped to America in 350 pieces.

Finally, I was thrilled to learn that Emma Lazarus wrote her famous poem, “The New Colossus,” for an auction to raise money for the pedestal fund. Simply amazing.

A: I have three more picture books coming out in the next two years and they’re in various stages of development. I’m writing a few new picture books, both fiction and nonfiction, and I’m noodling around with some ideas for a middle grade novel, which I really need to start writing. Any day now.

A: My editor at Scholastic, Dianne Hess, was kind enough to give me seven pages of back matter. For kids or adults who want to delve deeper there is a boatload of fun information that didn’t make it into the story.

Also a free downloadable Curriculum Guide with discussion questions and STEM activities is available on my website: https://chanastiefel.com/. Thanks so much for featuring me and my book!