Robert McCaw is the author of the novel Death of a Messenger, now available in a new version. It's part of his Koa Kane series, which also includes Fire and Vengeance and Off the Grid. He lives in New York City.

Q: This is a new version of Death of a Messenger--did you change the book in any way?

A: Yes. As the Koa Kane series developed, I explored new aspects of Koa’s character, described how he copes with his flaws, and included more of his unique history.

Republishing Death of a Messenger with Oceanview Publishing allowed me to incorporate some of those character developments from the subsequent books and work them into the story. Accordingly, I hope readers see a more complex protagonist in this version.

Q: How did you come up with the plot for this novel?

A: The plot grew out of one of my early trips to the 14,000-foot summit of the Mauna Kea volcano, the tallest mountain on the Big Island. I discovered ancient adze quarries not far from some of the world's most modern and complex telescopes. 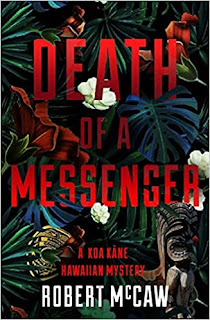 The contrast between the old and the new fascinated me. The stone tools fabricated on the volcano's slopes—emblems of progress in their day—have given way to computer robotics—symbols of our modern scientific successes. The parallels were too compelling not to became part of a novel.

The adze makers chose Mauna Kea to prospect for materials because the combination of its volcanism and its glaciated condition during the ice ages produced a tough and durable form of lava.

They lived in a harsh and violent time when Hawaiians still practiced ritual sacrifice, and they inexplicably disappeared without a trace. Historians and archeologists have no idea why sometime around 1600, well before Westerners arrived, the adze makers abandoned their quarries.

In their place, roughly 400 years later, astronomers created the world’s most powerful telescopes. They chose Mauna Kea because its summit rises high above most of the atmosphere, making it an ideal celestial observation site.

That transition from the ancient to the modern mirrored the history of Hawaii. It became part of the original inspiration for the plot of Death of a Messenger.

Q: In our previous Q&A, you said that "life is research for a novelist." Was that the case with this novel as well?

A: You bet. On early morning trips to the Suisan fish market in Hilo, I attended auctions run by a giant Hawaiian fishmonger. He became the model for Hook Hao, who first appears in Death of a Messenger and then again in the subsequent Koa Kane books—Off the Grid and Fire and Vengeance.

My time in the military informed my portrayal of Lieutenant Zeigler. Similarly, prosecutors I met over the years defending criminal cases became models for Zeke Brown, the Hawaii County prosecutor, who appears in all three books.

The “life is research” approach also gave rise to ideas for settings. Excursions to a church in North Kohala, the dormitory complex on Mauna Kea, Hawaii Volcanoes National Park, and the old covered sidewalks of Hilo became inspirations for various scenes in Death of a Messenger.

Other personal life experiences also found their way into the atmospherics of Death of a Messenger. I drew upon earthquakes I experienced in Japan for the earthquake-like scene in the adze makers cave. My military helicopter and armored personnel carrier experiences added realism to the noise and vibration of Koa's trips in choppers and APCs. And there are many similar examples throughout the book.

Some of the atypical language of Death of a Messenger comes from just living in Hawaii. Examples include the way Hawaiians "talk story," the way locals sprinkle Hawaiian words into English sentences, and the habit people have of attributing all volcanic activity to the tantrums of Pele, the goddess of fire.

A: First and foremost, I want readers to engage with the characters and enjoy the story. That said when a recent review of another book in the series on the Criminal Element blog stated that “the culture was practically another character in the story,” I wanted to cheer.

My goal in Death of a Messenger was to accomplish just that— make the Big Island, its history, culture, and language more than just a setting. I hope readers will see Hawaii and its culture as vibrant characters pursuing a journey through time, along with my human characters.

A: In addition to writing, I seem busier than ever with author tasks. First, the breaking news: Oceanview has just agreed to publish the fourth book in the Koa Kane series, tentatively titled Treachery Times Two. So, there’s work to be done in the final editing, proof-reading, cover design, and marketing campaign.

I’m also responding to interview requests arranged by my excellent publicist, FSB Associates, for the republication of Death of a Messenger and the other books in the series.

A: There is nothing good about the coronavirus, but the isolation it enforces frees authors from distractions and, in my case, makes me more productive.

The virus is also changing the way book sales and publicity work. Closed bookstores have accelerated the trend toward e-books. Book talks that used to occur in bookstores are now "zoomed" across great distances. Social media is even more critical than ever as a means of advertising.