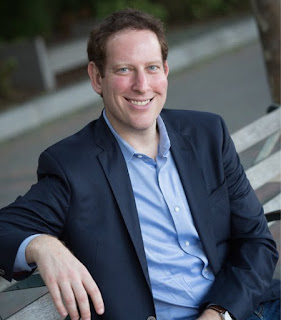 Jason Pinter is the author of the new novel A Stranger at the Door. It's the second in his Rachel Marin series, which started with Hide Away. He is founder and publisher of Polis Books.

Q: You write that your character Rachel was inspired by a comment your wife made after your daughter was born. How did you end up creating Rachel?

A: Shortly after our oldest daughter was born, I made a (bone-headed) comment about how we didn’t need to leave the baby monitor on all night. My wife told me I would never understand what it felt like to carry a child inside of you, and then worry about it being outside of you. Needless to say, she was completely right.

That was partly the germ of the idea for Rachel Marin, in that she’s someone who’s endured a terrible trauma, and because of that molded herself into both a protector and a fighter. But those two sides often compete against each other. She wants to fight for justice, but has two children who depend on her. 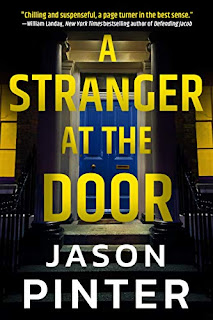 How do you reconcile a desire to fight for others when those closest to you need you as well? I loved the potential for a character like that in a thriller novel, someone who was smart, capable, and skilled, but had to always had to battle the internal and external.

Q: How do you think she's changed from one book to the next?

A: In Hide Away, Rachel has every intention of flying under the radar. But after she gets involved in the central murder in that book, she realizes that her skills are useful, both to fight for justice but also to allow herself something of a life. Since her own trauma, she never fully allowed herself to heal.

In A Stranger at the Door, Rachel is allowing herself to move on, to take on a new vocation, to tentatively enter a relationship. But of course, we all know what happens to well-laid plans.

A: For both Hide Away and A Stranger at the Door, I did a lot of research with both law enforcement and forensics, learning everything from what kind of gear police use during their investigations, to what happens to a structure during a house fire.

I enjoy that part of it, learning those important trades, and then the key is blending them seamlessly into the story so that the research adds dimension to the plot and characters rather than overwhelming them.

A: I hope readers are both entertained by the suspense and mystery, but that the characters stay with them. It was hugely important to me to make Rachel and those in her world, her children Eric and Megan, and Detectives John Serrano and Leslie Tally, feel real.

A: Hopefully enough people will enjoy the first two Rachel Marin books that I’ll have the chance to write more, but in the meantime, I’m working on a standalone thriller and something else totally different.  And that’s all I can say for right now!

A: Thank you to all the readers who have come along for Rachel’s journey so far. During these strange and challenging times, writers appreciate readers more than ever!