Paige Bowers is the author, with David Montague, of the new book Overnight Code: The Life of Raye Montague, the Woman Who Revolutionized Naval Engineering. Bowers has also written the book The General's Niece.

Q: How did you and David Montague end up writing this biography of his mother, Raye Montague?

A: My agent originally approached Raye about writing her memoirs after seeing her on Good Morning America a few years ago. Ultimately, Raye needed a writer to work with, and after some discussions with her and her son, they determined the writer should be me, which was a tremendous honor under the circumstances.

I worked with Raye and David to put together a proposal, which my agent then brought to publishers in the fall of 2018. Unfortunately Raye went into hospice and then died right around the time the book found a home at Chicago Review Press, which published my first book, The General’s Niece.

Because of Raye’s death, the book shifted from being her memoir to becoming her biography, and David signed on to the project to help me unearth her papers, answer my seemingly neverending questions, and direct me to other people in his mother’s life to interview.

Over the course of the year it took to finish what we had begun while his mother was still with us, David was a constant sounding board and resource, just the best possible partner I could have asked for in this process. 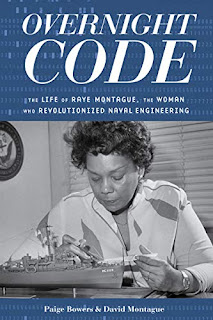 Neither of us could have done this without each other. And both of us are incredibly proud of this special book that resulted from us working together to tell the story of his mother’s truly inspiring life.

Q: As a Black woman, what were some of the key obstacles Raye Montague faced in her career?

A: Because of her color and gender, Raye was treated as less capable than her White male colleagues. As a result, she worked easily twice as hard, if not more so, to break glass ceilings at the U.S. Navy and then to create opportunities for other women and people of color.

Q: What do you see as Raye Montague's legacy today?

A: Not only did she change the way the Navy designed and built its ships with a computer program she debugged and then successfully used to create the Oliver Hazard Perry frigate, but she spent a lifetime mentoring others, encouraging them to stay in school and to not let obstacles stand in the way of their dreams.

David has grabbed the baton his mother passed to him, and is often speaking to schools and other groups about the causes that were dear to her heart. Like her, David is a brilliant, charismatic mentor and public speaker who is actively engaged in making the world around him a better place in which to live.

A: I began by sifting through books for greater detail about Arkansas history, specifically during the Jim Crow era. Then I did some secondary source research about the times in which Raye lived, because while she had a truly extraordinary life and career, the historical moment provided a backdrop for this story that made it all the more remarkable.

Then, David sent me a huge box of his mother’s papers, which I scoured for detail and insight about her life. He also directed me to a wide range of people who his mother knew, and I interviewed them at length.

I also interviewed David about his memories of his life with his mother. David is a former federal investigator, so he too would conduct interviews when possible and share the results with me. Aside from the multiple phone calls a week to clarify things, and to gather more information, David and I were often kicking emails back and forth about details big and small.

Then, I drove out to Little Rock to meet with David in person, go through more of Raye’s papers, and interview even more people in person. The entire experience was rich, rewarding, and something I’ll never forget.

A: Over the years, I’ve learned that any time I talk about what I’m working on, something goes wrong with the project in some way! So I’m definitely working on something, but I’m not quite ready to talk about it yet. I promise to let you know as soon as I can, though.

Other than that, readers can expect to see David and me out in the world talking about Overnight Code.

A: As I wrote, I’d find myself inserting little footnotes here and there that, yes, illuminated a certain point, but were also grounded in conversations that David and I had that were sometimes really funny or evocative of our youth. I'd giggle when I did it.

When I look back, I realize that I was not only working with David to write a story about his mother, but dropping little bits throughout the book to illustrate the fun we had doing this, and the friendship that developed between us as a result. David Montague is truly one of my favorite people, no doubt about it!