Amanda Panitch is the author of The Trouble with Good Ideas, a new middle grade novel for kids. Her other books include It's My Party and I Don't Want to Go. She lives in New York City.

Q: How did you come up with The Trouble with Good Ideas, and your character Leah?

A: Leah is basically me as a kid, and her circumstances (other than the magic and the golem!) were also basically mine at that age. I was weird and nerdy, without many friends and yearning to fit in with the cool kids at school, and dealing with my own Zaide declining in health.

The thought of losing the Saturday afternoons I spent at Zaide's with my extended family scared me, and I would've done anything to keep them. Current me researching Jewish mythology wondered, "What if I'd been able to build a golem?" and the book sprang from there!

Q: How much did you know about golems before writing the book, and what especially intrigued you about the idea of a modern-day golem?

A: I knew a fair amount about golems from growing up at synagogue and from reading many of the excellent works about golems (shout-out to Sweep by Jonathan Auxier, one of my recent favorites!). 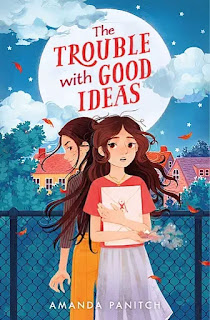 Most of the books and tales I read took place in the past, and it made me wonder how a golem might be different in the modern day, in a modern middle school. How would a kid today shape a golem, and for what purposes, compared to those of her ancestors?

Q: What do you think the story says about family, and about the relationships between kids and their older family members?

Q: What role do you see Leah's Jewish identity playing in the story?

A: I don't think there would be a story without Leah's Jewish identity. She grew up with it as I did, and it's shaped the both of us in ways that are easy and not so easy to see.

I grew up really insecure about my nose (the scene in the first chapter where a character in Leah's non-Jewish school asks her if all Jewish people have noses shaped like sixes the way she does actually happened to me in middle school!) and didn't read a lot of Jewish kidlit other than Holocaust books - Kid Me would've been so happy to read about a kid with a nose and identity like hers!

A: I'm working on my next middle grade book, The Two Wrong Halves of Ruby Taylor, which I nicknamed the "evil grandma book" before we had an official title.

Like The Trouble with Good Ideas, the evil grandma book deals with Jewish identity and mythology, and is inspired by the relationship I had with one of my grandmothers (which, as you may guess from the nickname, was not a positive one!).

A: I thought I knew a lot about Jewish mythology before starting my research for this and upcoming books, but I really had no idea just how rich the material was in my own history and mythology!

Just listing some things off the top of my head, there are Jewish vampires, Jewish werewolves, tons and tons of demons in all different shades, and enormous monsters of the earth, land, and sky who the righteous will get to eat when the end of time comes. If you're intrigued by the golem, I would absolutely recommend doing some more reading.