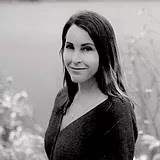 Jeannine Ouellette is the author of the new memoir The Part That Burns. She is the founder and director of Elephant Rock, a creative writing program in Minneapolis.

A: To be honest, I didn’t really decide to write it—I simply had to write it, to come to terms and make peace with certain elements of my past, especially my childhood and adolescence. In many ways, I have been writing this book, or trying to write it, all of my life.

In the book—in the second to last chapter, which I wrote with my daughter, Lillie—the narrator says, “In psychology, the life story model says people in modern societies provide their lives with unity and purpose by constructing internal and evolving narratives of the self. This model explains that identity takes the form of a story, complete with settings, scene, character, plot, and theme.”

And that’s essentially what I was doing through writing this book: examining my own life, and interrogating some of the narratives that have defined it.

I was also eager to understand and illuminate how the visceral experiences of pregnancy, birth, and breastfeeding were so pivotal in my regaining the ability to “live in my body” rather than hover above or beside it. And mothering—the experience of loving my children deeply—was pivotal as well, in the way it taught me how to see myself as lovable, too. 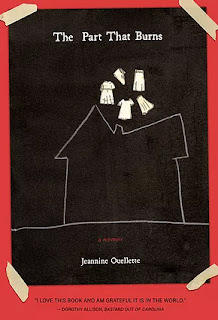 Additionally, of course, I wrote the book hoping that it would offer something to people who carry their own traumas. I hope it offers a testament to the power and possibility of resilience, healing, and love. That’s what Dorothy Allison’s Bastard Out of Carolina did for me back when I was in my 20s, and I’d love for my book to do that for someone else now.

A: Although writing about childhood sexual abuse was painful, it was healing, and often joyful, which may surprise people. It certainly surprised me.

In fact, until The Part That Burns, I had never been able to successfully capture, in any kind of artistic way, my childhood experiences on the page. If I have done that now—if I have made art from life—it is because the methods I used to approach the writing were often very playful, especially for the most difficult vignettes.

The techniques I used were drawn from an approach I learned from a mentor named Paul Matthews, author of the creative writing sourcebook Sing Me the Creation. Back in 2009 or so I attended a three-week workshop with Paul where I learned how to use writing constraints, which were new to me at the time.

I had been writing for more than 20 years by then, but had always written with fairly conventional methods—starting with an idea, building a scene around that as an entry point, building some momentum on the page, amassing a certain amount of material, then finally shaping it iteratively until I had an essay or a story.

But writing constraints work differently. Constraints are like puzzles, and those who are interested in experimenting with constraints can find a lot of helpful resources on the internet, as always.

The most famous reference for the use of writing constraints is probably the Oulipo, a group of mainly French-speaking writers and mathematicians who, since the 1960s, have gathered to develop and use constrained writing techniques to catalyze creativity.

The way Paul Matthews taught with writing constraints was just zany and wonderful and incredibly freeing, and it opened up a whole new world for me in terms of my writing life.

For me, the bonus is that writing constraints also ended up making it far safer, emotionally, to take on some of this old trauma. I wrote about that for my graduating lecture during my MFA program, and I’ve written craft essays about this topic as well, like this one, From Play to Peril, in Cleaver Magazine.

A: I love that question because the title means a lot to me. Twice in the book, the narrator uses that phrase, the part that burns.

Once the narrator says it—well, she thinks it—while she’s meeting with her therapist. She is pregnant with her second child, and having a lot of flashbacks of her stepfather’s abuse, and she is suffering a great deal.

And then she has recently read something about cellular memory, which is about how we carry all of our experiences in our cells forever, which is making her terrified that she will always be harmed or controlled in some way by her stepfather’s molestation.

And as she is pondering this, she thinks to herself, “When I’m fiery and floating, I watch myself from above. My body is not me. I am the part that burns.” What she is describing is a sort of disassociation from her physical body.

A: Well, I hope they take away some of that lightness and a lot of hope—despite that there is heaviness in the book—because there is also resilience, forgiveness, and a great deal of love.

I hope they find reassurance that even when life is painful and messy, it can lead us to essential places, places where we are able to become our fullest, most whole selves.

At one point in the book the narrator says, “It takes so long to become anything. Especially yourself.” And I really believe that—that we are always in this process of becoming. We are human beings, and that’s a verb. We’re evolving always, or should be.

Sometimes that means letting go of old ideas of who we are. Sometimes it means circling back to experiences we thought were behind us, but really are not, because, as Einstein tells us, past, present, and future are just an illusion. Everything is now.

Which is hard on the one hand, because it means nothing is every truly “behind us.” There’s no such thing. But it’s wonderful, too, because it means we have chance after chance to reorganize our understanding of our experiences and of who we are, and who we want to be. For me, that’s part of what cellular memory and epigenetics are all about. I find it wonderfully hopeful.

A: I’m working on a few things, including a lot of flash fiction pieces which maybe could at some point form a collection. But I’m also working on a novel, and all of that feels really good, to be writing fiction again!

A: That it’s scary to share the truest version of who you think you are. But no one should feel as if they have to keep secrets or stay silent about their lives—maybe especially about childhood sexual abuse, because the secrecy and silence around that is so incredibly destructive. For some of us, creating a narrative of our lives is the surest path to healing.

That doesn’t mean it’s not scary though. The first time I ever told someone what my stepfather did to me, I was a teenager, and my stepmother at the time recoiled from me as if I was dirty or dangerous, which I write about briefly in the book.

It was intensely painful to be treated that way. For a very long time, her shaming reaction stopped me from being able to talk again about what had happened to me. It took me decades to reclaim my voice.

So, for anyone out there who is afraid, I just want them to know I understand. I know what that fear feels like. I feel it still. And it’s okay to be afraid. But it’s also okay to tell your story, if you need to, and are able to safely. I wish for that—safety and healing—for everyone.