Candace Jane Opper is the author of the new book Certain and Impossible Events, which focuses on the aftermath of a classmate's suicide. She lives in Pittsburgh.

Q: Why did you decide to write this book, and what impact did writing it have on you?

A: The impetus to write about this experience came early and never left, it only changed shape. At first, I was driven by a need to document the events around Brett’s death, which had been largely overlooked by my community.

For a long time I believed that his suicide and its connection to the culturally resonant phenomenon of Kurt Cobain’s death was the one story worth telling; over time, as the roots of my fixation grew deeper, the story became more about the long-term impacts suicide can have on a person.

I began to ask fewer questions about why he took his life and more questions like: Where do we get our collective ideas about what suicide means? Who has the right to publicly grieve? How long is too long to mourn someone? Why am I still holding onto this?

Though the writing was frequently cathartic, I did not write to achieve “closure,” a loaded concept in which I find many flaws. 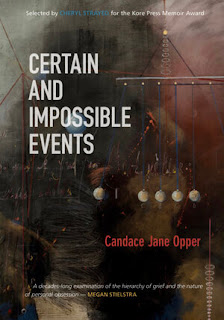 I wrote more to arrive at a sense of justice—for him, for my 13-year-old self whose grief went unheard, for the many people whose suicides and grief go largely unrecognized.

The writing was draining at times, gratifying at others, but it mostly felt necessary. The whole thing seemed as close to a “calling” as I think I will ever come.

A: As I was researching and writing the book, I noticed that I often leaned into mathematical metaphors to describe suicide. Every suicide, in its own way, is a kind of equation, a unique series of factors that add up to that sum.

The act of thinking about why a person ended their life is a sort of mathematical process, an effort to find all the pieces that make the equation complete—even if its completion brings us little relief.

I fell down a rabbit hole one day looking into mathematical terminology and came across the use of the words “certain” and “impossible” to describe the probability of events.

I felt like this concept both eloquently and pragmatically described my feelings about Brett’s suicide—an event that seemed (and still seems) simultaneously predictable and beyond the realm of possibility.

Q: You write, "There is no graceful way to explain why one holds onto things she is expected to let go. After all, your mother was right: I barely knew you." Why do you think Brett's suicide continued to have such an impact on you?

A: That’s the elemental question I tried to answer with this book, and I still haven’t completely figured it out! The best answer I can muster is that my fixation is also the result of a complicated equation of factors, the most obvious of which is that suicide and all of its unanswered questions can so easily haunt any of us.

Plus so many other circumstances: that I was so young and impressionable when this all went down; that I have a naturally obsessive personality; that I am generally unwilling to accept the world as it’s handed down to me.

I’m sure someone qualified could swiftly diagnose me, but, in the end, I think what we do with our obsessions matters more than why they exist.

A: I want people to know that grief takes different shapes, and that there is not just one correct or “healthy” way to experience loss.

I also want people to know there is more than one way to talk about suicide. I worry that most people engage with the topic through the bigger suicide prevention organizations, whose messaging might not resonate with everyone.

I tried to write this book in an accessible, inclusive way that speaks to our understandable curiosity about the topic while still communicating its gravity.

A: I’ve been writing more about film lately, which brings me a lot of joy. I grew up surrounded by movies so I think a lot about how cinema has influenced my understanding of reality, and how the boundaries between movies and life can become really fluid.

Those ideas have always been present in my writing, but I think they will become more prominent going forward.

A: I plan to organize some participatory, story-sharing initiatives around the book’s release, so stay tuned!