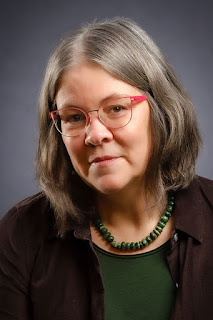 Cathy Carr is the author of 365 Days to Alaska, a new middle grade novel for kids. She lives in New Jersey.

Q:  How did you come up with the idea for 365 Days to Alaska, and for your character Rigel?

A: The main inspiration was an article I read a long time ago (think decades instead of years) in a magazine called Mother Earth News.

In those days Mother Earth News was geared toward people interested in the off-the-grid lifestyle, what they still call in Alaska “homesteading” even though the last homestead offerings in the United States happened ages ago.

The article was a profile of a family of five living the off-the-grid lifestyle in northern Canada. Pretty standard stuff. They hunted and fished, grew, gathered, and preserved food, took trips to town, and did home schooling.

I wouldn’t remember it so vividly except for the fact that a while later I came across a follow-up article about this family. This follow-up was less standard stuff, and I was fascinated. The parents had split up. The mom had taken their three daughters and moved to a city in southern Canada. She had had to find an apartment and get a job.

What really stayed with me was the short section dealing with the girls. Two of them had made a good adjustment. They were enjoying life in a big city and public school. One of the girls had not. She really missed her father and her old life, but there was no going back to it. She was stuck. 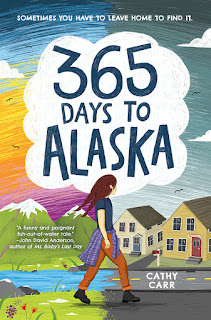 I knew I wanted to write about that third girl, and Rigel came into my mind pretty much immediately.

For me, she’s a study in contrasts—tough but easily hurt, comfortable in the wilderness but bewildered in her suburban middle school, smart at math but slow at figuring out social dynamics.

Rigel’s loyalties are also torn. Without giving too much away, I hope, one of my favorite bits from the book is the moment when Rigel realizes that going back to Alaska to rejoin her father means leaving her sisters and mother behind. She’s known this intellectually, but this moment is when she actually grasps the reality of what that might be like.

It’s so upsetting she deals with it the way many of us deal with unpleasant stuff in our lives—by shoving it away and refusing to think about it any longer. But of course she can’t keep that up forever.

A: I knew a lot about the off-the-grid and self-sufficiency lifestyle. I have an old college friend who’s doing a version of that in Colorado right now. As a matter of fact, she just got a compound bow as a present from her husband so she can learn how to bow-hunt--which is pretty hard-core, as Rigel would say.

But I still had research to do on modern homesteading and I needed to get up to speed on daily life in modern rural Alaska. I read everything from newspaper articles to children’s books to Ph.D. dissertations, and I talked to a lot of people too.

Then the genius woman who became my agent, Rachel Orr, asked for a major rewrite of the novel (which was badly needed), and I introduced an injured crow to the book’s plot. That meant I had to do research on crows and corvids, and talk to people about bird rehabilitation.

I was regaling my husband night after night with crow stories at the dinner table. If he got tired of it, he never said so. They really are fascinating animals.

As far as surprises go, there were many. For one thing, I got interested in bush cuisine. On a recommendation from an article in the Anchorage Daily News, I bought a cookbook called Cooking Alaskan with recipes for all kinds of wild foods.

As one of its reviews on Amazon reads, “Now I know that my sourdough can tan the hides of small animals and if I survived an encounter with a polar bear I have a suggestion for how to prepare it as soup.”

So many people in Alaska get some of their food off the land. If they’re not hunting or fishing, they’re finding mushrooms or berrying. This has always been part of life for many Alaska Natives and the book includes a lot of Native recipes which are still regularly made and enjoyed.

One recipe that’s stuck in my mind is a dessert of wild berries mixed with dried milk and powdered coffee creamer. It’s a bush version of strawberries and cream. Some folks might say “Ick,” but when you live in the bush and don’t necessarily have a fridge, you use shelf-stable foods and do a lot of improvising. I’ve been sending recipes to my friend in Colorado, who’s gotten interested in stuff like elk pot roast.

Q: The novel begins in Alaska and then takes place mostly in Connecticut. How important is setting to you in your writing?

A: You know, if you had asked me a few years ago, I would have said setting was not that important in my work. Writing this novel has made me realize that setting is important to me. I’m not quite sure how I missed that before.

Luckily, I’ve had the chance to travel a lot and I’ve also moved several times, so I have some choices when it comes to my settings. Right now I’m thinking my next book is going to be set in New Jersey, which is where I live.

I admire writers, though, who have their chosen territory and explore it thoroughly in book after book. Think of Jane Austen and her corners of rural England, or Beverly Cleary and what she did with Portland, Oregon, back in the days before Portland was the cool place to be.

A: I think one of the great hidden problems of childhood is lack of agency.

There are many important things in kids’ lives that they have so little control over. Your parents get divorced. Your sister is acting all weird lately. Your dad drinks too much. Your parents decide to send you to Catholic school, or a big public school. (Or an elite private school--Jerry Craft’s New Kid is a great exploration of that.)

You as a kid are affected by these things that don’t stem from your own desires or decisions. And, often (although this may be changing now), you’re not even consulted.

That can be a really challenging situation.

If reading Rigel’s story makes some kid think, “I’m not alone,” then the book is a success.

If the novel helps a kid figure out a way to cope in a stressful situation, or how to acquire more resilience to deal with difficult and unchangeable facts of life, than the book is a success.

If the book helps a middle-schooler not to worry overmuch about popularity, I would be happy too. That’s a message I wish I had gotten when I was younger.

To look around for the kids who are comfortable in their own skins and do their own things. It seems they’re always there if you pay attention. To try not to get caught up in the popularity sweepstakes that go on, even nowadays, in so many schools.

But, at the end of the day, kids will create their own meanings when they read the story—and I hope they do.

A: I’m working on my second novel right now. It’s about a 12-year-old girl who lives with her grandmother. The girl’s mom abandoned her when she was very young.

She’s settled into a reasonably happy routine, but her grandmother is kind of timid and stuffy, and the girl sometimes feels stifled--like there’s something missing from her life, and all the fun happens elsewhere.

Then, the summer she finishes 7th grade, some surprising changes happen and a long-buried family secret comes to life. All of a sudden this girl is dealing with more novelty than she knows what to do with. The book’s in its early stages, so that’s all I can say about it right now.

Covid has thrown a huge wrench into my writing routine. I didn’t know how good I had it while I was writing 365 Days to Alaska, but one thing I do know about myself is that I tend to finish things I start.

A: Please buy my book, support diverse authors, eat some fruits and vegetables, get enough sleep, and take care of yourself and each other. It’s been a pleasure to think about these questions.