Q&A with Paul B. Cohen 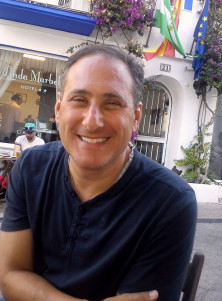 Paul B. Cohen is the author of the novel Tales of Freedom. A playwright and theater critic, he is based in the UK.

Q: You based your novel Tales of Freedom on a film script you'd written. How did you come up with the idea for the story, and why did you decide to turn it into a novel?

A: I had long been fascinated – as have other writers – by the creation of golems in Jewish tradition. Alice Hoffman, for example, has just released an acclaimed new novel that involves a protective golem.

I first learned about golems – humanoid creators created by masters of Kabbalah (Jewish mystical knowledge) – from the story of the most famous: the Golem of Prague. When I started writing in earnest, a long time ago (!), I wanted to use the legend but bring it into modern times somehow.

Although the Holocaust – I prefer the term “Shoah,” meaning calamity, rather than the connotations of sacrifice with the word Holocaust – is rightly memorialised in numerous books and films, I feel that the reality of Jewish (and non-Jewish) resistance is less celebrated and far less known than it should be. 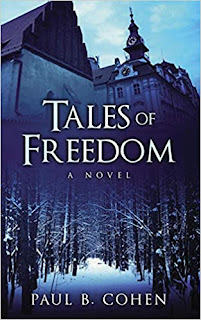 Tales of Freedom started off as a screenplay – I’d moved to Los Angeles from England to study at the University of Southern California in a graduate writing program, and since I was studying with an Oscar screenplay winner, the late Frank Tarloff, it made sense to write the story as a film script. It actually won a university-wide award when I was still at USC.

About a decade later, I decided I could more fully explore its themes as a novel.

Q: What kind of research on the World War II period did you need to do to write the script and then the book, and did you learn anything that particularly surprised you?

A: When writing the script, I was thousands of miles away, so I relied on books and then the Internet. I returned from LA after almost 10 years to live back in my native England, and felt I really needed to visit Prague for myself, so went with my brother.

I found the city, and particularly the Jewish quarter, smaller than I had expected, and this helped me work out the permutations and logistics for the climax in Prague near the end of the book. I guess its size was surprising!

A: That anyone who resisted the Nazis and their allies, in any way, whether Jewish, non-Jewish or of any religious group, or none, were heroic for doing anything. And resistance didn’t just have to mean fighting: it was any act that helped the occupied push back against their occupiers.

A: A lot – being a writer means being a reader.

A: I have a number of short stories in print, and was a winner of the Moment Magazine–Karma Foundation annual short fiction awards. The judge the year I won was none other than Alice Hoffman! I’m proud of my tale, “Lecha Dodi,” which is also steeped in mysticism.

“Lecha Dodi” is one of a number of stories in a collection I’ve just put together called The House on Honeysuckle Street.

I have also recently completed a new novel, Somebody Else’s Life, about a famous artist, his biographer, and what it means to live another person’s life.

A: Tales of Freedom is available on Amazon, and I’d love any feedback from readers – and thank you, Deborah, for these questions!