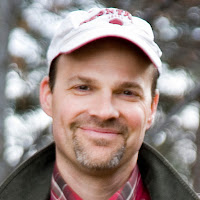 Doug Emlen is the author of Beetle Battles: One Scientist's Journey of Adventure and Discovery, a new book for kids. His other books include Animal Weapons. He is a biology professor at the University of Montana.

Q: Why did you decide to write this book for young readers?

A: I really believe that science is an adventure. I and most of the scientists I know travel the globe in pursuit of answers, attempting to solve our respective mysteries. This could mean climbing ropes into the canopies of tropical trees, following birds high on jagged slopes of the Himalayan mountains, or diving beneath Antarctic ice.

In my case it meant living in a rainforest for several years studying beetles, and then following those beetles to Australia and Africa and Montana. It meant getting stranded in the dark in a strange country, surrounded by lions in a tent in the Serengeti, and landing backwards on an aircraft carrier. So in this very literal sense, doing science actually is an adventure.

But science is also an intellectual adventure as we get swept into the thrill of solving a problem, piecing together clues in just the right way, answering questions no one has ever answered before. The rush from an epiphany can be electrifying, and for many of us this thrill -- the charge into the abyss of the unknown -- is even more exciting than the physical adventure of fieldwork.

I love everything about science, and I wanted to find a way to share this with middle-school aged kids. I had lots of help from a talented editor (Emily Feinberg) and an experienced (and incredible) children's book author (Dorothy Hinshaw Patent), as well as colleagues and friends, and, of course, my own children.

I learned as I wrote that "people want to read about people", and that narrative stories are far more engaging than stand-alone non-fiction.

So I pulled out journals and letters I'd written to my girlfriend (now wife) more than 20 years before, and took a dive back into my past. I immersed myself in the fear and frustration, joy and determination that I'd felt while traipsing across South America in vain in an attempt to study a giant rhinoceros beetle, and all the ups and downs of my eventual work on tiny dung beetles in Panama.

I realized I had all the adventure I needed to tell this story sitting right in front of me. So I set out to tell the tale.

This book is a journey in every sense of the word, and I hope it will feel as refreshing and enjoyable to readers as it felt for me.

I try to pull kids into the world of a field biologist - the sounds and smells of a tropical forest at dawn, the agonizing tickle of hundreds of tiny ticks racing across your body, the overwhelming sensation of thousands of beetles falling from the sky into your hair and down the back of your neck and all over your lap. 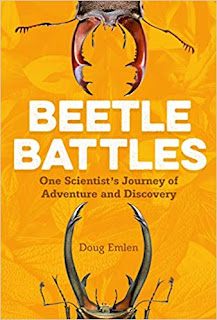 Along the way there is of course biology -- woven throughout the fabric of this tale -- and there is a process. A logical method to the madness, a way of pursuing knowledge based on careful experimentation and comparison of predictions with results.

Science is a self-correcting process, and at multiple points in my journey this meant I had to accept the fact that everything I thought I'd known was wrong. But that's also part of the journey, and it may be the most important lesson of all: often we are wrong, and that's okay.

So why did I write this book? Because deep down I know there are kids out there who will love this type of a story, and I want to show them what it feels like to be a scientist. Who knows? Maybe some of them will decide to be a scientist too...

Q: In our previous interview, you discussed the similarities between animal and human weapons, and you write in this book, "And how incredible that insights from these same little beetles might help us understand our own weapons, the political realities we grapple with in our everyday lives--even threats to our national security!" What are some of the insights you've gained from researching these beetles?

A: The most timely insight comes from the sneaks and cheats.

In my beetles this meant tiny males who could not afford to pay the price of having long horns. Instead of trying in vain to play by the rules, these little males cheat: they look and act like females, and they dig side tunnels that bypass the guarding male. By sneaking around the large, horned males, and finding the females on the sly, these males break the rules of engagement.

As I discuss in Beetle Battles, I learned on this intellectual adventure that sneaky cheaters like these little beetles can collapse an arms race, since they erode the benefits of big weapons.

Military technologies have the same vulnerability. The most elaborate, state-of-the-art weapons are incredibly expensive, often so costly that only the wealthiest nations can afford them. What do you do if you cannot afford these weapons? You cheat!

Right now our most expensive weapons, things like aircraft carriers and F-35 fighters, are all at risk for the same reason: they depend critically on computers and software to function. And this makes them vulnerable to a sneaky, cheating tactic: Cyberhacking.

Cyberhackers are exactly like sneaky dung beetles: by worming into the software control systems they can undermine the effectiveness of these technologies, without paying the price of producing those weapons themselves. 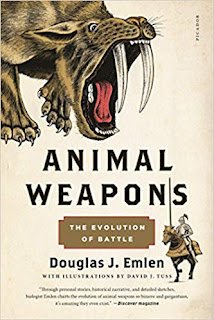 There are actually lots of parallels between dung beetles (and other animals with big weapons) and our most expensive weapons, but the threat of cyberhacking is the most urgent, and the one I have been traveling to give talks about.

Another scary parallel is the importance of "duels" -- one-on-one contests are a prerequisite for triggering an arms race. Politically, the world coalesced around a showdown between the United States and the USSR during the Cold War, and that one-on-one confrontation fueled the arms race.

Today, our defense policy is starting to talk about a "Great Power Competition" between the U.S. and China. Well, if we take our lessons from dung beetles, then this a very scary and dangerous situation indeed, since it is exactly the type of showdown that is likely to spark a new arms race.

This might seem like a dark set of examples, especially for a "children's" book. But I find teenagers today are very dialed in with the events of the world around them, and I think they will appreciate the parallels.

Academically, the fact that animal and military weapons are so similar is really cool. The relevance of the comparisons to contemporary events should only help make this all the more exciting.

Q: The book includes a variety of photographs. How did you choose those?

A: Many of these are my own, taken at the time of the story, so I picked them to help bring the people and places (and animals!) to life. Everything about this book is intended to create the sensation of actually being there, and I think pictures make a really big difference.

I also tracked down artists and photographers to beg permission to include some of their images, to bring the ships and planes and crazy animal extremes to full splendor. These really are extreme weapons, and words can only take you so far. Sometimes you really have to see these things to believe them.

Q: What do you hope young readers will take away from the book?

A: We live in an increasingly polarized society, where science often gets caught in the crossfire. This has led to lots of misunderstanding, and, unfortunately, for a great many families, it has led to mistrust. This breaks my heart and terrifies me at the same time.

I'm not sure how to fix this problem. But my gut tells me we go back to the basics. Strip away the politics and the controversy and focus on the people who actually do the science, and on the adventure. Hopefully, this will demystify the process, and make science start to feel a little less threatening.

I had to start somewhere, and the story I knew the best was my own. So I'm beginning here, right now, with this book. Let's put the thrill back, and see if we can't start to make a difference.

I also think sometimes it's hard for people to imagine why "basic" research is valuable. Yet so often we find that our greatest advances come from unexpected places.

I'm not pretending that my research is going to be that sort of an advance, but I do love the fact that a muddy-boots biologist studying dung beetles in a rainforest ended up being asked to speak at a national conference on cybersecurity, and was flown by the Navy to go visit an active duty aircraft carrier. How did that happen? But that's also the point. You never know where basic research will take you!

A: I'm writing a grant proposal to try to fund the next phase of research in my lab. My students made some startling discoveries with the rhinoceros beetles we're studying, and I think there are important new directions we now need to take our research. Just the latest sudden turn on our path to discovery!

--Interview with Deborah Kalb. Here's a previous Q&A with Doug Emlen.
Posted by Deborah Kalb at 7:13 AM