Nancy Kriplen is the author of the new book J. Irwin Miller: The Shaping of an American Town. Her other books include The Eccentric Billionaire and Dwight Davis: The Man and the Cup. Her work has appeared in a variety of publications, including The New York Times and Smithsonian. She lives in the Indianapolis area.

Q: Why did you decide to write a book about businessman J. Irwin Miller and his hometown of Columbus, Indiana?

A: I had written a New York Times travel article about Columbus and its midcentury modern architecture, surprising to find in a small town in the Midwest.

The story of how this all happened led to businessman and art patron J. Irwin Miller, which made me curious to find out more about him. My recent books have been biographies. I like the form and I was looking for a new subject for a biography. Irwin Miller seemed perfect – and friends in Columbus were very encouraging.

A: Fortunately, the massive Irwin-Sweeney-Miller collection of papers is located at the library of the Indiana Historical Society in Indianapolis, only about six miles from my home office. 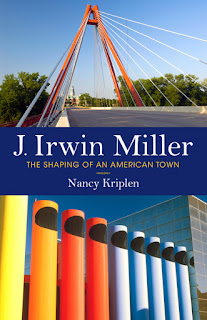 In addition to searching other collections, I interviewed members of the Miller family, in New York and Connecticut, conducted telephone and in-person interviews, and interviewed Kevin Roche, one of the few architects still living, whose Columbus buildings are significant.

I was surprised by Irwin Miller’s work with presidents John Kennedy and Lyndon Johnson and his important role in the passage of civil rights legislation in 1964.

Q: How would you describe Columbus, Indiana’s relationship to its architecture?

A: Its residents, at least most of them, are proud of their buildings – the churches, schools, library, homes, even fire stations designed by such important 20th century architects as I.M Pei, Eliel and Eero Saarinen (father and son), Harry Weese, and Robert Venturi.

There is continuing civic energy for events that build on and celebrate the town’s design heritage. Of course, not surprisingly, some residents are more concerned with the work-a-day aspects of life than with art. 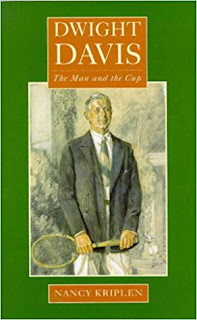 Q: You have also written biographies of Dwight Davis, founder of tennis’s Davis Cup; and philanthropist John D. MacArthur. How would you compare the three men?

A: Dwight Davis and Irwin Miller, though nearly a generation apart, were both urbane, sophisticated and educated. Davis went to Harvard and law school, Miller to Yale and Oxford, and MacArthur to the eighth grade.

Davis and Miller built their fortunes on those of earlier relatives. John MacArthur was a scrappy, risk-taking rascal who built his fortune himself in insurance and real estate, sometimes going right up to the edge of what was legal.

The wealth of all three men benefited their country and often other nations. The silver tennis cup that Davis donated in 1900 traveled the world, and as governor-general Davis helped lead the Philippines into a new era. The money from the John D. and Catherine T. MacArthur Foundation continues to fund a variety of grants, including the high-profile “genius awards.”

Irwin Miller’s corporate leadership (Cummins Engine Company) brought good jobs to thousands, encouraged civil rights, and was the spark behind his hometown’s development into a gem of midcentury modern architecture. 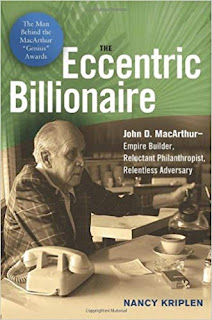 A:  One of our children once asked why I always wrote about rich, dead, white men. One of the people I’m thinking about for a new biography is a woman, though the form may be a documentary instead of a book.

A: I love the lively, bright front cover that the Indiana University Press design team chose for this book, J. Irwin Miller: The Shaping of an American Town.

At the top is Columbus’s dramatic Stewart Bridge over White River, designed by J. Muller International (1999). At the bottom is the AT&T switching center with tall stacks that look like giant crayons, designed by Paul Kenyon (1978).

To keep the front cover uncluttered, Irwin Miller’s name is on the front – but his photo is on the back. A modest man, I don’t think he would mind.

Besides, just visible through the bridge, is Isaac Hodgson’s 1874 Bartholomew County Courthouse, the historic Columbus building that Irwin Miller often said was his favorite.